In my Bloom's Two sigma essay, in section 12, What should you learn I was thinking about a problem that comes before the question of the optimal learning method. Once one has decided, say, that one wants to start practicing SRS (Space Repetition Systems, the use of), what should one SRS? Should a software engineer SRS their programming language of choice? Of course not: They are using it all the time. Spaced repetition works, but knowledge or skills you use every day are effectively built in SRS. There is also knowledge one is exposed to daily that is not immediately useful. You will know who the current President of the US is, it's hard to escape from that fact, but knowledge of that fact will be useless to you (Unless you work in policy): No course of action you have in mind will change by knowing that name (Unlike knowing the policies or the political party).

Then we get into the domain of things one could effectively try to more intentionally commit to memory, here some of those are some you may not want to remember, these are "obscure facts far away from your domains of interest". For example, while reading a book you may come across the concept of the standard hydrogen electrode or the composition of the Parliament of Denmark or Mitama. These are some articles I pulled from "Random article" in Wikipedia. There are 6.2 million articles on wikipedia. Do you want to remember them all? Maybe you want, and there's nothing wrong with that. But most people are more selective.

The other part of this 2x2 quadrant of exposure and usefulness are facts in your domain of expertise that you don't use every day. For example, while I spent some time writing the Longevity FAQ and I prepared a table comparing two calorie restriction studies done in macaques, I don't remember its contents. I wrote a review on immunosenescence but I don't remember if M1 macrophages were the inflammatory ones while M2 are the generally anti-inflammation ones.

One could group these with the "obscure facts" category and just avoid learning them, but a reason why one may want to commit them to memory is that even if now you think they are useless in the future they may be handy, especially do draw connections across unrelated domains! A real world example was awareness of the following facts:

Then it hit, could it be that those same cells in the immune system are somehow the cause of the NAD deficiency? Looking around, indeed they were. One could say that eventually I would have come across that paper anyway, but remembering what CD38 was helped me make that connection faster. 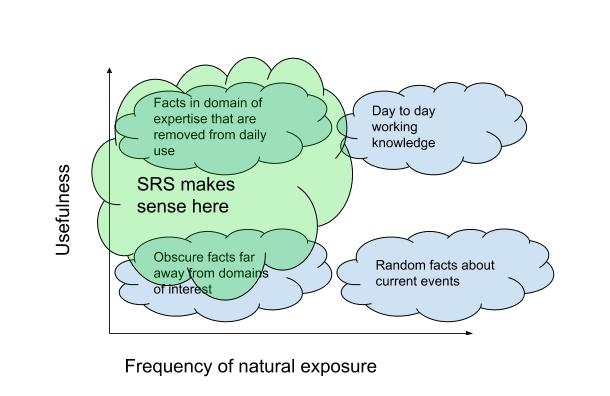 I started writing this post and then stopped to do a quick experiment, I went back to a book I had just finished reading about Pasteur, then skimmed through the book. What was the difference between what I thought I remembered and what I remembered? Of course, there were a few facts that I had already forgotten a week after reading the book, like the fact that Pasteur was born in a town called Dole. I'm fine with forgetting that. But I'm not fine with forgetting that Pasteur became director of scientific studies at the Ecole Normale at the age of 34, or that the anthrax vaccine were developed by Toussaint before Pasteur got there (using Toussaint's method rather than the one Pasteur thought would work; and the one everyone expected him to have used). These and other facts matter for various reasons: The first one matters as an example of the fact that it used to be possible to reach the commanding heights of the French academic system at a very young age, the second matters as an example of Pasteur's scientific tactics, which underlie the book's key point, that there is a discrepancy between the public and private science of Pasteur.

But it doesn't end there. As I had been reading recently about cholesterol and saturated fats and whether the ketogenic diet will kill you (wrt a mediterranean diet1 ), I recalled that I have seen the words LDL-P and LDL-C countless times, probably reading through their definitions. Wouldn't it be great if I could remember that?

My typical thinking has been that if I wanted to memorize that long tail of facts it would take a lot of time to review all those cards. But maybe it doesn't take that long. So after conversations with Andy Matuschak I decided to start ankifying my life, something I had done previously only for attempts at language learning. Ultimately the best test is giving it a try.

‹ Book review: Scientific Freedom, the elixir of civilization Are ideas getting harder to find? ›