Some data on soviet GDP growth. First, the chart many supporters of the USSR like. It supposedly shows that the soviet economy worked relatively well, and that industrialisation and growth were due precisely to central planning, when the Soviet Union was formed, in 1922, after the revolution in 1917. 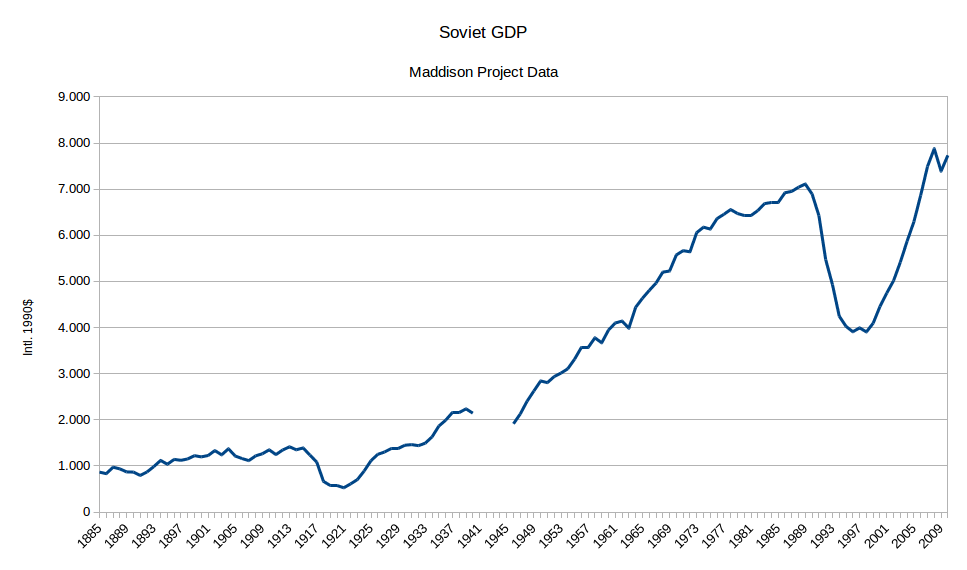 We can then compare the Soviet Union to the United States 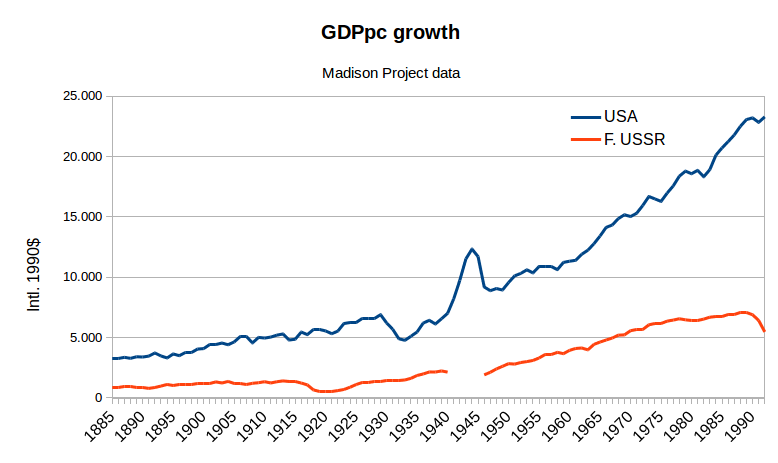 The USSR never did really compete in the same league as the US, and the gap between the two didn't became narrower after the USSR began, even when taking into account that poorer countries tend to grow faster when they industrialise.

We can then compare the USSR with other countries that had similar incomes in 1930. The USSR doesn't do particularly well in this metric. Initially it did better than many countries, but by the 70s it was being outpaced by the rest. By 1990, the average income in the USSR matched that of Malaysia, below countries like Spain and Portugal.

The USSR could be seen as a long-term bubble economy: Initial fast-growth, then stagnation, and finally crisis, in comparison to the rest of the economies, that took longer to take off, but that growth was then sustained. 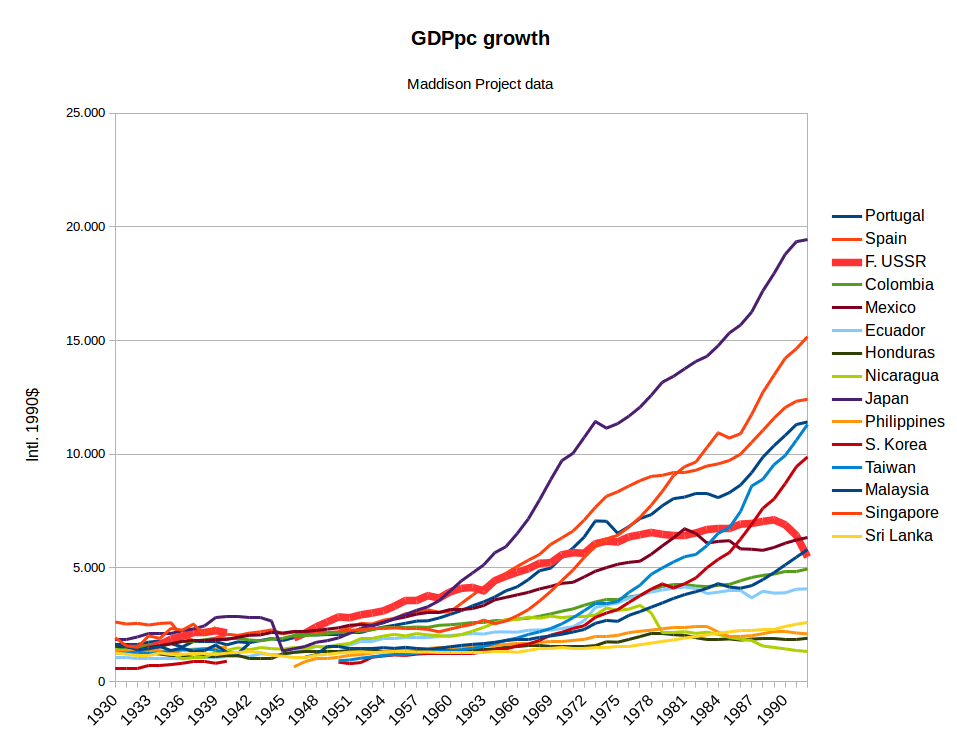 We can also take another year, like 1950, to avoid WWII effects, and use indexed data, but this doesn't change the picture much. That's why I included fewer countries, to make my life easier. I also included the United States and Switzerland and Hong Kong. Hong Kong tells roughly the same story as Singapore: that you can be really poor and grow rich with adequate institutions and capitalism. The United States and Switzerland (Or any developed country) illustrate an effect that wasn't obvious from the previous charts: that it isn't fair to compare the rates of growth between these countries and the SU. Richer countries grow at a slower pace. 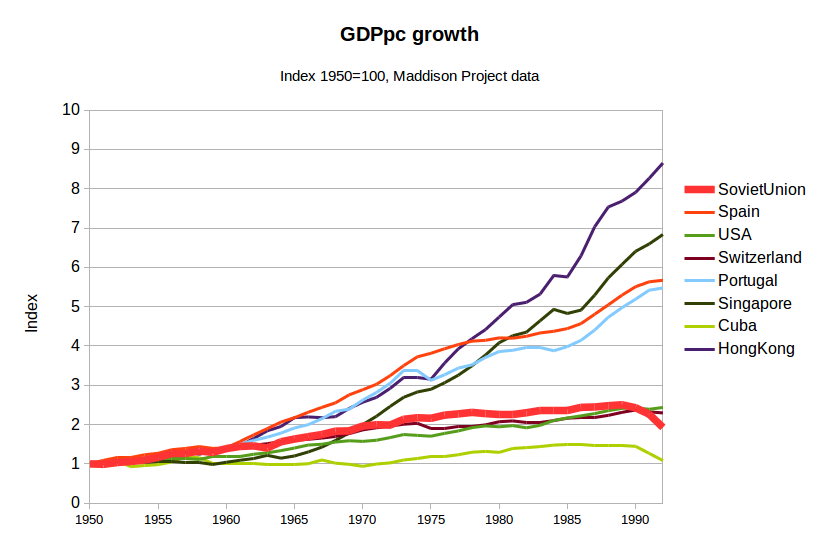 Given this data, the Soviet Union was the mediocre economy economists say it was, not a healthy, growing, superpower. If the USSR had an impact in the world, it was due to its size, natural resources, population, and strong military, not because it was more productive than other countries.

And in case you were wondering about Cuba, here's the data for Cuba and some countries in its surroundings. I have a post about Cuba here, in Spanish. 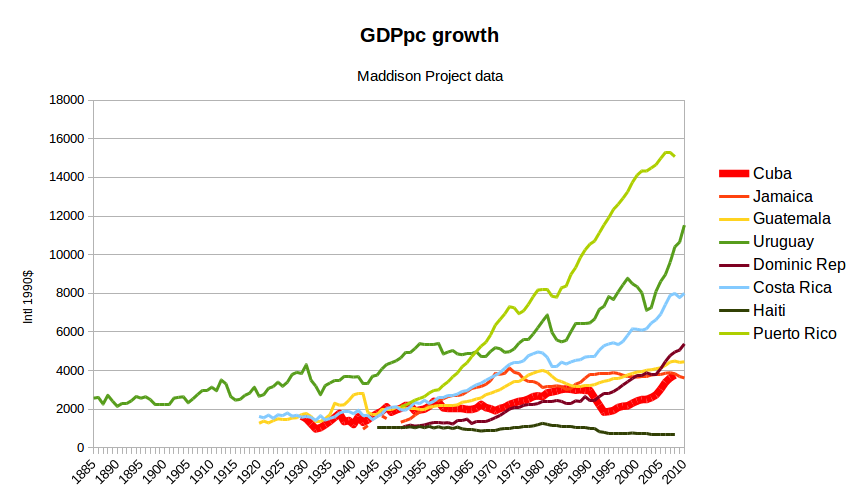 Against these charts, it could be argued that these measures of GDP don't really capture the welfare of the inhabitants of these countries. Fair enough, we could then study those other indicators and examine quality of life in a different way. But it has to be granted that by this measure, the best (argueably) centrally planned economy did not outperform the best free market economies.

To finish, the Stalin question. Did Stalin help industrialise Russia? Would Russia be a poor agrarian country without his policies?

Therefore our answer to the ‘Was Stalin Necessary?’ question is a definite ‘no’. Even though we do not consider the human tragedy of famine, repression and terror, and focus on economic outcomes alone, and even when we make assumptions that are biased in Stalin’s favour, his economic policies underperform the counterfactual. We believe Stalin’s industrialisation should not be used as a success story in development economics, and should instead be studied as an example where brutal reallocation resulted in lower productivity and lower social welfare.

(Edit) But wait! What about Robert Allen's From Farm to Factory? What if we consider the USSR starting with Stalin (1928). 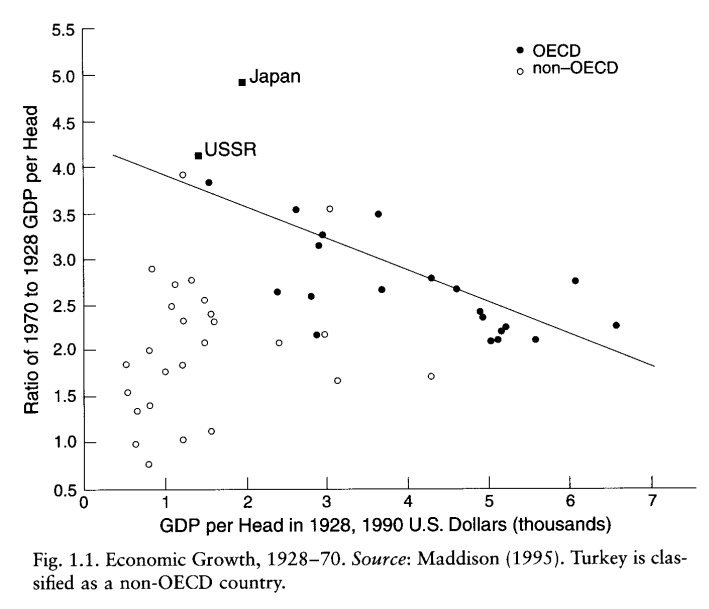 Then we find that from 1928-1970, the USSR was the fastest growing economy except for Japan!

And even compared to the Third World, its performance was remarkable, 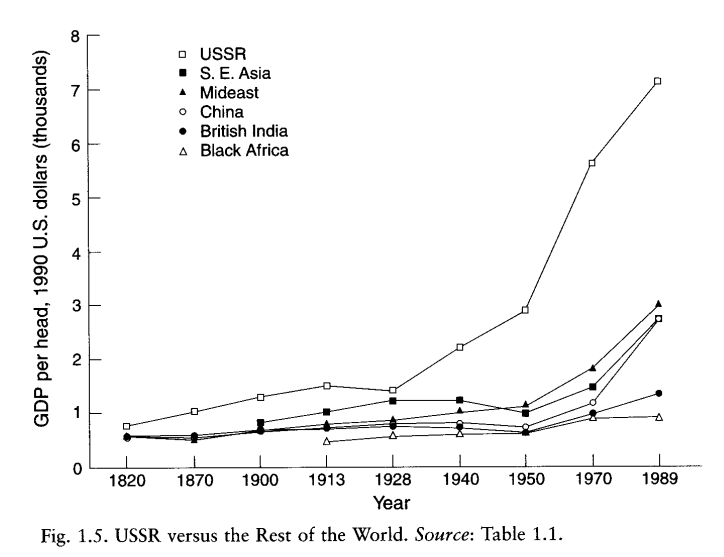 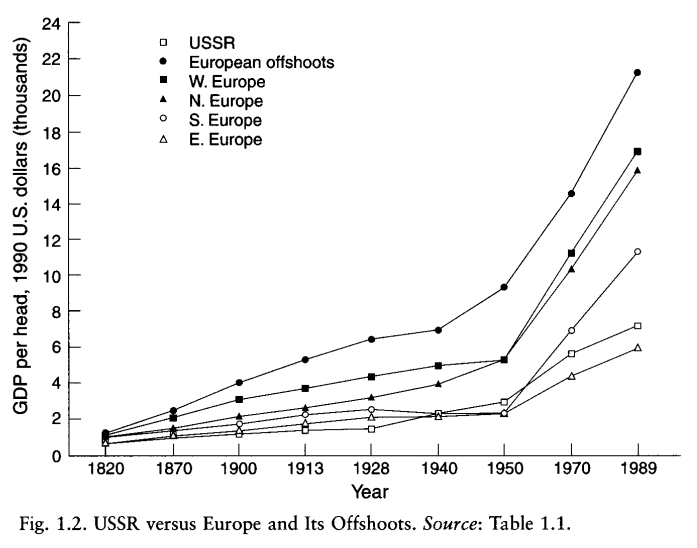 Allen uses Maddison (1995) data for his charts. The Maddison Project has updated data, so I first attempt to replicate his Figure 1.1. 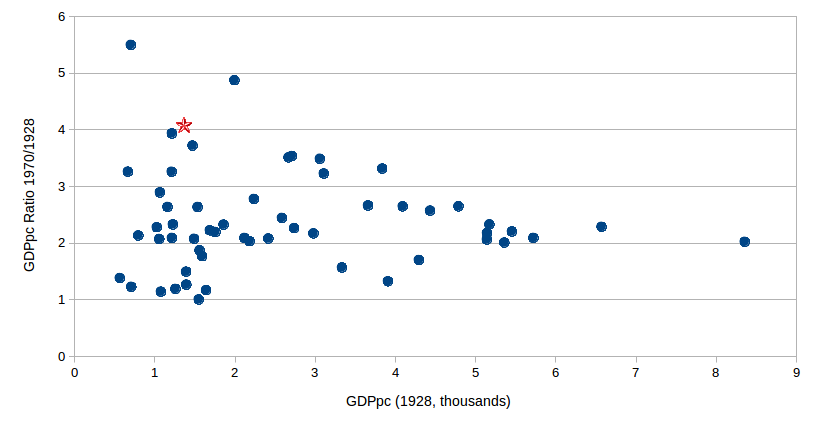 The little red star is the USSR, of course. So Allen's chart is correct. In mine, Jamaica appears as the top performer, and Japan comes as second. The USSR was the third fastest growing economy in the world in the 1928-1970 period (Including countries for which we have 1928 data).

Next, I consider the period 1928-1989 and 1928-1991. Allen stops at 1970 because until then 'the planning system was working well'. In my view, we should see what came after 1970 as a consequence of what came before, including perhaps the breakup and crash of the Soviet economy in 1991. Stopping our analysis when the planning system stopped working well seems to me like stopping an analysis of the Spanish economy just when the housing bubble was about to pop. By this I mean that Soviet growth was propelled in great measure by increasing inputs (capital and labour), not productivity, and that is not a stable long-term run strategy. At some point you run out of people to put to work. I refer to you to this other post of mine for more info on this. This is not an speculation of mine, it is the consensus view of why the USSR ended up stagnating (Though this by itself did not cause its collapse). 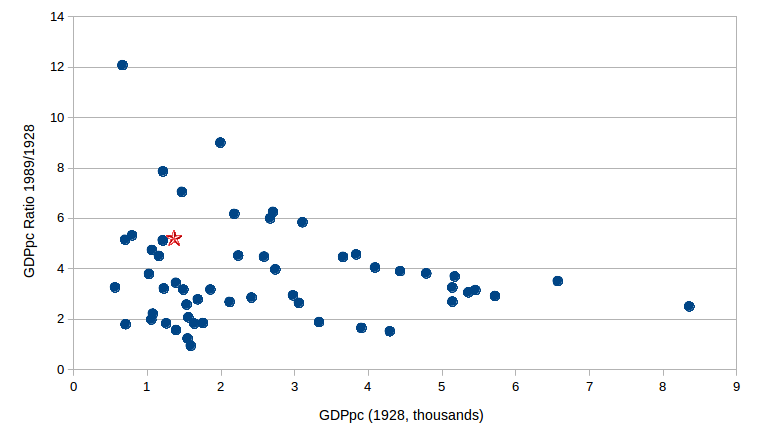 When extended to 1991, the USSR is also overtaken by Spain, Jamaica, and Singapore 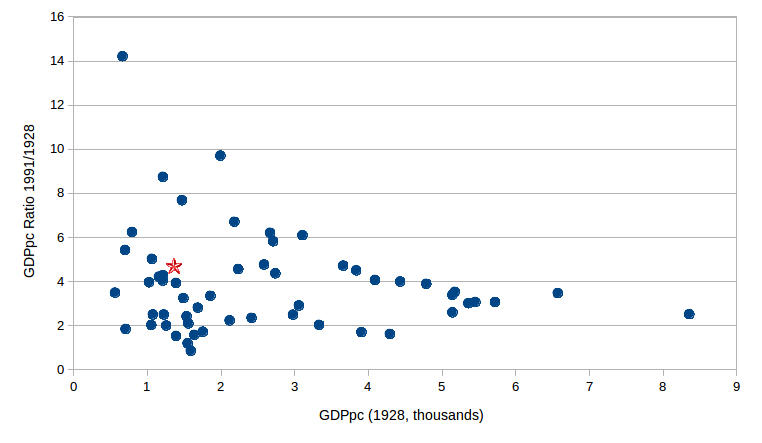 Let us now consider one final chart: 1950-1989. Here we have data for far more countries, and we avoid the effect of WWII. The Soviet Union was here the 61th out of 148 economies in growth. Still in the upper 50%! 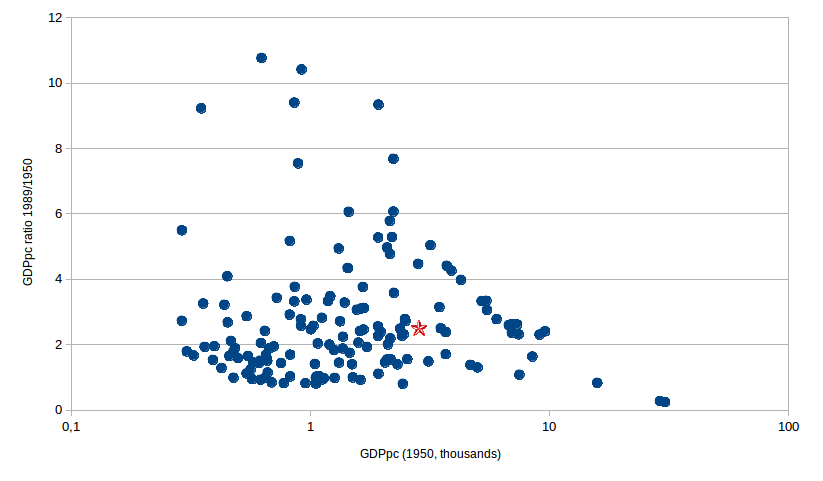 Zooming in near the USSR, 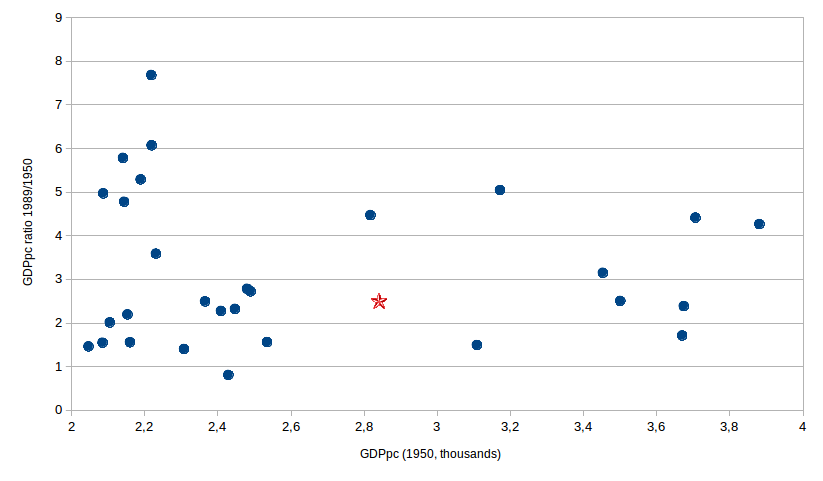 Yet another way of looking at this is  expressing GDP per capita as a fraction of US GDP per capita. Doing that we get this chart: 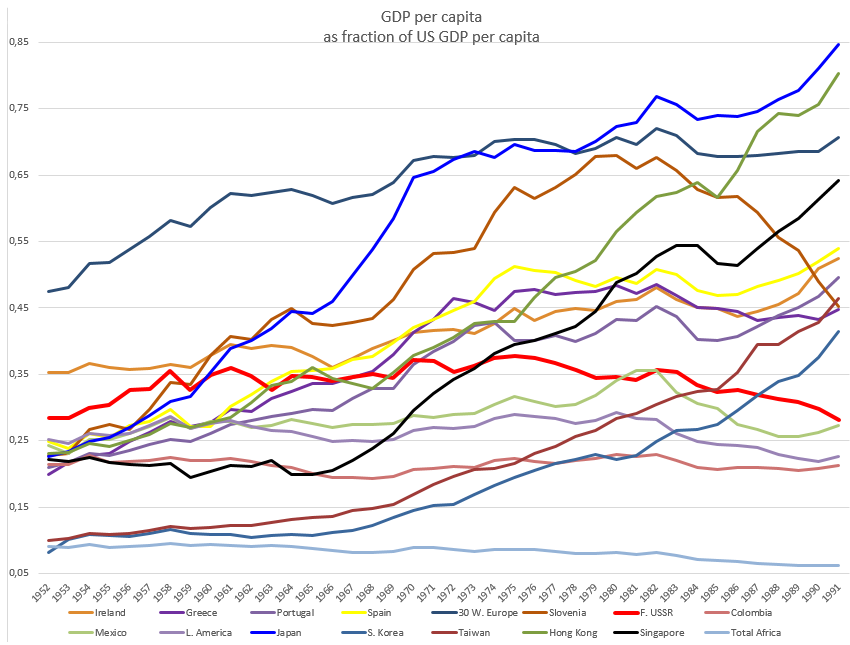 I included countries already chosen in previous charts, plus averages for Africa, Latin America and Western Europe. In 1952, the Soviet Union was only behind Ireland and Western Europe as a whole. By 1975, when the USSR reached its maximum, it had a higher GDP per capita than Mexico, Latin America, Colombia, South Korea, Taiwan, and Africa.

By the end of 1991 (just before the fall), it had about the same GDP per capita as Mexico.

A chart with growth rates for the Soviet Union and the Former Soviet Union (basically, Russia). I see the Brezhnevian stagnation (Under Brezhnev, Andropov, Chernenko and Gorbachev, as the Perestroika did little to change the trend) as a followup from previous policies to Stalin-Khrushchev. So it's dubious that such growth rates could have continued indefinitely. We must also note that the FSU is recovering from a crisis, which makes easier to have larger growth rates. 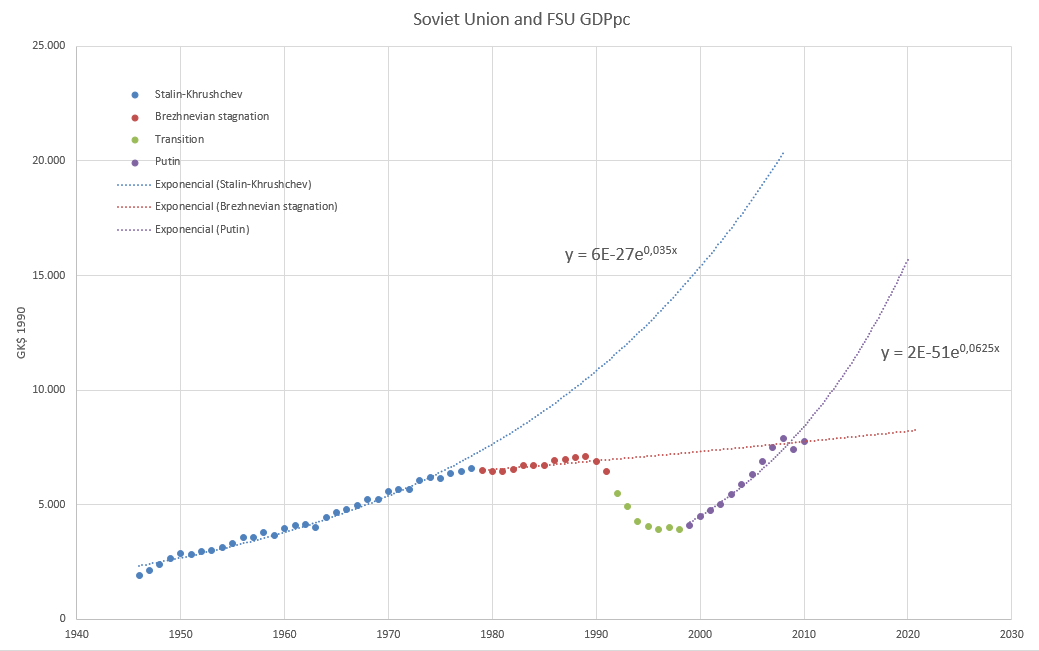 The analysis above may need some further reconsideration. The charts presented until now are controlling just for initial GDP. But Easterly & Fischer (1995) run a regression for the 1960-1989 period, controlling for variables such as initial GDP, share of investment, and secondary school enrollment. GDP growth for the Soviet Union in that period was 2.36% vs 2.00% for the West. But when controlling for those variables, the predicted growth for the Soviet Union jumps to 4.7%. Meaning that the economic system itself reduced growth in -2.34 points. (The value for the West does not change). In the 1950s, however, Easterly & Fischer do find that the Soviet system performed well in terms of growth. They ultimately explain this by what the dub the _extensive growth hypothesis: _Growth fueled by increasing the amount of available factors (Labour and Capital) rather than increasing productivity. That, combined with a low elasticity of capital-labour substitution (Using a CES production function, they get 0.4) meant that diminishing returns to capital would ultimately stall growth when the capital share of the economy began to reduce as the economy shifted to consumer goods.

(Edit 5. And hopefully the last one!)

An analysis of Allen's book can be found here

The USSR did grow quite fast under Stalin. The question would then be to explain why did it grow so fast, why did it stagnate, and why Cheremukhin, Golosov et al. find that it wasn't because of Stalin, while Allen finds the opposite (I'll write a followup post explaining that). However, if we consider the Soviet Union starting with Stalin and ending in 1989, its performance was not as good. Furthermore, if we consider the post-WWII performance of the Soviet Union in comparison to other countries, it shows signs of stagnation. We can then say that the impressive growth of the Soviet Union was a one-off event, produced by Stalin's industrial policies. The USSR, however, wasn't able to sustain this growth rate.

Furthermore we would also have to examine other countries with central planning to see if the Soviet model was replicated, or if the performance of the Soviet economy was also due to specific factors present in Russia but not elsewhere. Note also that the Soviet Union spent a sizable share of its economy (15-17%) on military spending (vs 5% in the US in the 80s) and on investment (rather than consumption), so GDP growth does not translate into population welfare equally in every country. This could be read to mean that the USSR would have done even better had it spent less on the military. Or, conversely, that its GDP did that good because of it, if it's easier to grow an economy oriented to produce T-72s and MiG-29s than consumer goods. As you can see in my other posts, healthcare, food consumption, and working conditions were not as good as this GDP comparison might suggest.