How fast can buildings be built these days?

I took all buildings taller than 200m from here and did some plotting. Data quality was a bit bad, it only states construction time a whole years, not months, and they may not be accounting for start/stops. Nor is it fully comprehensive, I had to add most of the Broad Group's buildings data. BG's are smaller than the others, so they break the 200m criteria. But I've included them because of how unique they are -they are built really fast-, and because they claim to be able to build a tall (>800m) tower with the same techniques, in 90 days. In the plots below, BG's are excluded unless otherwise mentioned. First, this is year that took to build buildings that were started on a given year. These are yearly averages, and it is split  whether the building makes use of concrete or steel more heavily. There are also composite skyscrapers, but I ignored those here. No significant differences emerged though. 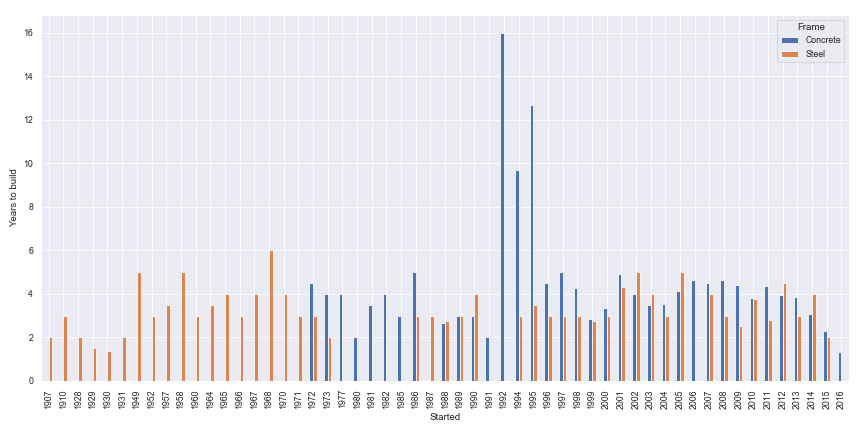 The most important graph, the one below. It shows meters built per year on average every year, and it shows that the early skyscrapers were built quite fast, and then it sort of stabilized at a slower rate. The outlier in the concrete frame category is an apartment complex in North Korea which may or may not be fake news. 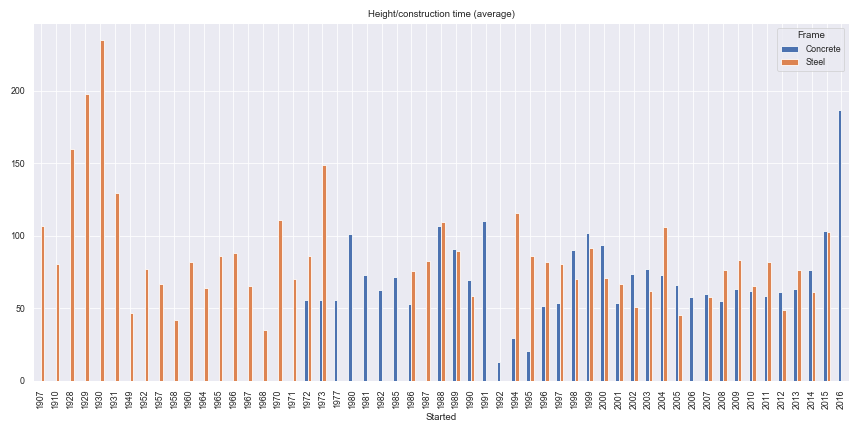 Average height did not change much over time (again, this is restricted to buildings over 200m). Nor does looking at floors instead of height change the picture.

Looking at a city level, the only country with data going back a suitable number of decades, the US shos a notable slowdown. It is less clear for more recent times. 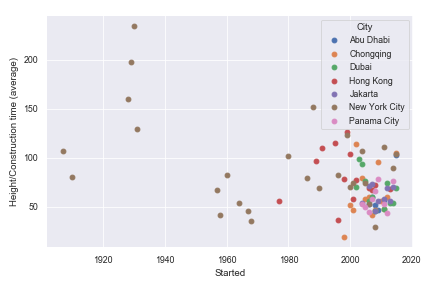 Even splitting by frame and city doesn't change the picture. These are all cities with the highest numbers of skyscrapers. 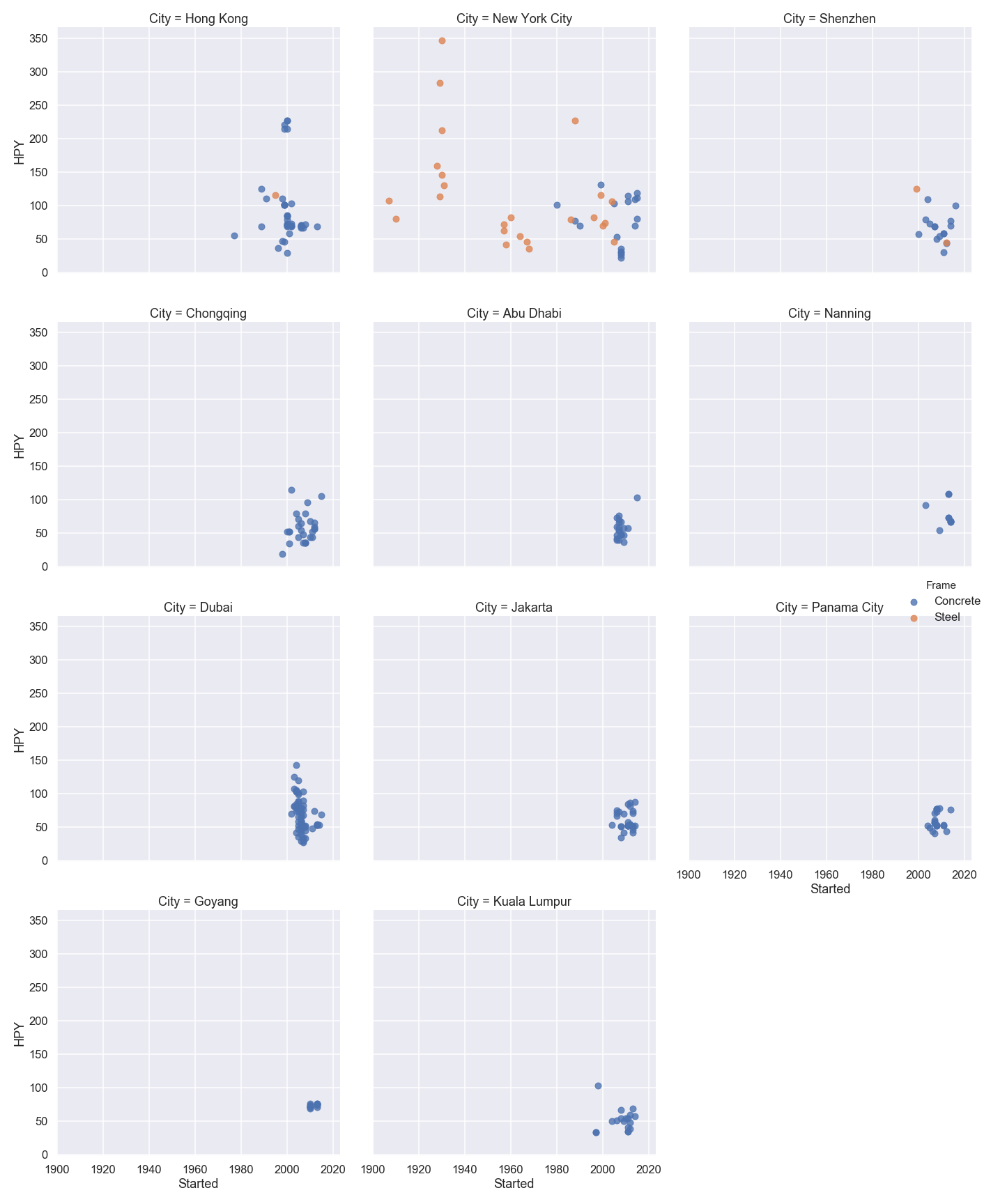 Looking at individual buildings (maybe the averages were misleading us?) shows that indeed the fastest built skyscraper ever is not a new one, and ditto for the second one.

If Broad Group's buildings are included, this is how it looks like:

Those are some insane building rates! (Sky City is a proposed building, not built yet). Note also that the buildings are in Changsha, which is where they are based, conveniently close to the factory churning out the modules they use in their buildings.

To compare between contries, I now look at the fastest built building per city in the last 10 years, excluding Broad Group and Pyongyang, and counting only those cities that have built 5 or more in that period. I see no obvious country-level effect here. 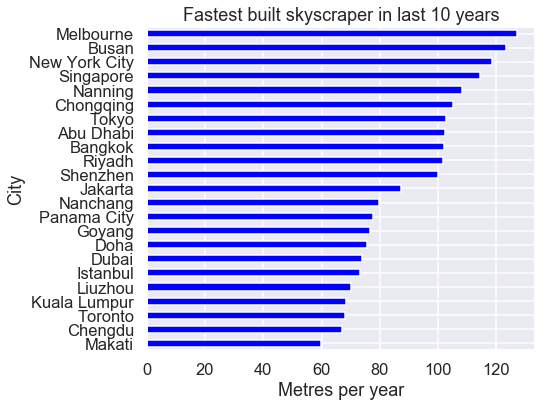 Also, taking not averages but just the fastest building built every year (again taking out Pyongyang and Broad Group), regardless of country. This seems to indicate that with the exception of The Belcher's tower(s) in HK and 60 Wall St, in general construction speed has remained stagnant for almost a century, and has actually declined since its peak in the Great Depression. 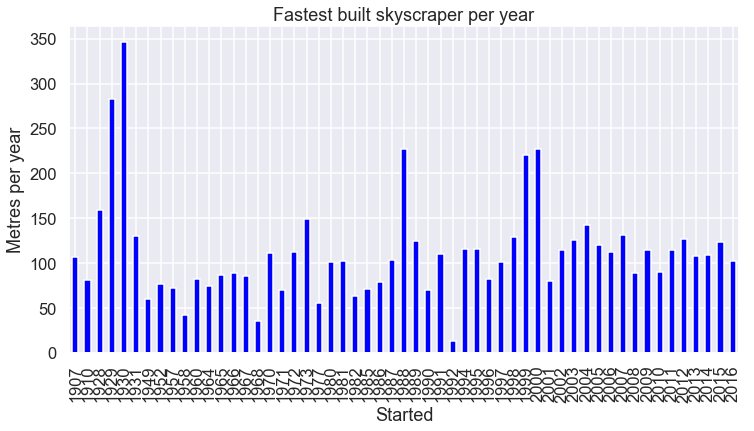 Now that this is established, the question is why. There are two whys: Why was the Empire State built so fast, and why hasn't Broad Group's skyscrapers spreaded even more.

I couldn't find an obvious why, so here's speculation: skyscrapers are often seen as  status symbols that call for each of them being custom-built, which defeat the point of prefabricating standard structures off-site. Another concern is sheer conservatism: No true skyscraper has been built based on Broad Group's (or similar) techniques. I wouldn't be surprised if building a supertall building of this sort would face additional regulatory hurdles.

A followup question is: But aren't there any other improvements that could decrease construction times? There may be, just compare construction speed between Chengdu and Melbourne. But even Melbourne is slower than NYC back when the Empire State Building was built.

So what's up with the Empire State Building (and The Trump Building, aka 40 Wall St). Some speculation in this reddit thread. It may have been the competitive spirit of the times, (the "Race into the sky"), or less regulation (we all have seen those pictures of workers in the Empire State with almost no protective equipment). But was there was no obvious law passed shortly after. And if it were over-regulation, it would seem odd, but not impossible, that every single country has overregulated.  It also seems that buildng speed (this is all looking at the US now) was faster during the Great Depression years. Before and after it was slower. If we are willing to count buildings taller than 100m instead of taller than 200m, the Bank of Tokyo Building (NY, 1896) was built at a rate of 51.5 m/year. Park Row building (NY, 1896), 40 m/year, the Wall Street Exchange (NY, 103 m/year) or the Allied Chemical Building (NY, 120 m/year). This is either lower than or in line with current standards.

This is a small sample, and I have deliberately tried to look for buildings that have relatively boring designs, I bet fancier skyscrapers will all-glass exteriors are pricier to build. But the Sears Towers example is there. The data quality here is low, but I am confident we can rule out order of magnitude-level changes in the cost of building skyscrapers.

In sum, it does look like in terms of price and construction time, not much progress has happened in almost a century. It is now possible to build taller skyscrapers, so in that sense it's an improvement, and now they are shaped in more aesthetically interesting ways than mere slabs. This may be due to the labour-heavyness of it as an activity, together with them being one-of-a-kind projects (like nuclear reactors), which makes it marginally more difficult to learn over time. It also doesn't seem the case that there has been an obvious worsening, even after diverse laws and regulations are taken into account. Meters per year continues to be constant. (Maybe they have precisely offset technological improvements!)

The Great Depression period seems unique in history in terms of buildings skyscrapers. Prefabricated buildings could help build faster, but conservatism and the need for fancy buildings will stop this. Most people don't live in skyscrapers though, and what I've said above doesn't apply to most buildings that do get built.

This post is a partial answer to one of Patrick Collison's questions. A full answer should be forthcoming. Here I've looked at the core claim and found it half-true. It is true in the sense that the Empire State Building was an impressive achievement compared to the present, but it's not true that the past has been better than the present; rather, the skyscrapers built during the Great Depression were. The theme that links his examples may be a heightened sense of urgency (race to build the highest skyscraper, beating the Soviets, and beating the Nazis) in industries that are highly people-heavy. Are megaprojects necessarily people-heavy? It would seem so. Aerospace projects are not built on assembly lines, neither are big power plants, or large scientific projects. And people heavy project are harder to improve in the way you can improve capital-heavy processes. There are two further avenues from which we can look at the question: One, to look at past bondonggles, other, to find current successes.

The P80 was built in 1944 by 23 engineers and 105 shop mechanics who worked 10 hours a day, every day of the week, and the US government made sure they had all the parts they required, and indeed the built the first prototype in 143 days. But, the P-80 was seemingly an unsafe aircraft during testing - or so claims wikipedia-.

In contrast, the world's first jet powered aircraft, the Messerschmitt 262, designed in 1939, and first test flight happening in 1941. This was a plane that was not developed under the haste the P80 was. The Gloster Meteor had its design started in mid 1939, and the first flying prototype was delivered in 1943.

We can of course compare this to the greatest money sink of them all, the F35, which may have well taken 14 years from inception to first flight, or the Eurofighter. But this really applies to all fifth generation fighters, in the US, China, and Russia. This may be due to the modern defence trend of having programmes where diverse contractors bid, which adds stages and complexity to the project. The P80 had none of this.

I can think of similar short scale design-to-flight aircraft being built when there are no national security and contractors at play: Those built by Burt Rutan.

We can try to compare instead big civilian aircraft instead of small fighter planes.

Accounting for complexity, increasing safety regulations and the need to build specialised tooling to build the latter designs, it doesn't look too bad to me. We can also look at Boom Supersonic's airliner, which is being developed on more of a startup mentality. Boom was founded in 2014, design seems to have started in early 2016. Initially, it was scheduled for 2023, now it is for 2025. That's 9 years. Accounting for the fact that it is more complex aircraft to design, it being supersonic, it also sounds about right. Their smaller demonstration aircraft, if everything goes according to plan, will have taken 3-4 years from design to flight, in line with historical standards. Perhaps Boom is not yet the best that can be done, or perhaps it's close, no idea. But this shows that the P80 being made in 143 days (though it would take more to get it into production) is not something one wants to look at to illustrate a general trend.

Still, this is no grounds for complacency. We can imagine, in the aerospace sector, a world were SpaceX didn't exist. We could be spinning justifications about why the cost of space launch has remained high for decades and saying that it has to be that way. But it didn't. Still, it took time. SpaceX seems to have come out of nowhere,  but the first Falcon 1 rocket was launched in 2006, and SpaceX itself was founded in 2002. Falcon 9 was launched in 2010 for the first time.

So my answer to Patrick Collison's question (this also goes some way towards answering the question of why is stuff getting more expensive) is that each example has to be looked at individually. Cases of very fast progress should be studied to learn lessons from them, of course. More in detail,

So all in all, if we control away war, and increasing complexity, and the fact that you can't optimise people beyond a certain point, and sprinkle on top some regulation-induced slowdown it's not clear that there has been a slowdown or stagnation in general for major projects. There where the case is clearest for a slowdown are in defense and aerospace related projects, and possibly public transit, which might deserve its own blogpost. The case of ships might be a case of successful modularisation: unlike skyscrapers, big ships are churned out in batches, and they are built near the factory that produces the modules. Based on this, I finally state what I think are the factors that will contribute to a megaproject being done quickly or slowly:

The discussion above is related to a more interesting one: How to improve things. Regardless of progress or lack thereof so far, how can things be improved from now on. Even if a field has been stagnant for 100 years, it can still be possible to find sizable gains. But knowing what has happened so far may help deduce heuristics to be applied for future projects.