OpenAI releases GPT-3, their latest general purpose language model. It represents a vindication of those who argued that "just more weights and data" would lead to a step change in performance. Gwern has more on this. Still far from AGI, but it's substantial progress.

There are some senescent cells -in the liver, in this case- the cleareance of which is bad for the organism

And peer review is broken, 1988 edition.

When are scientists most productive (when they have their "annus mirabilis")? Paper says that around their late 30s-early 40s though they make the caveat that if they apply their method to Einstein his recognized annus mirabilis wouldn't have been spotted. So it can still be the case that it is younger scientists that are having the interesting ideas even if they publish less pear year.

Tesla batteries. The company made a bet on using lots of smaller cylindrical batteries - where everyone else uses more space-efficient but expensive harder to manufacture prismatic-shaped or pouch cells - . And why isn't everyone else catching up?

We knew that pumping young blood into old mice made them healthier. But it seems that pumping old blood out of old mice and replacing it with saline also works(!)

The Endless Frontiers Act, a massive remodeling and expansion of the NSF has been introduced to the US Congress, it remains to be seen if it'll become law.

One of the few ways to get clear results in nutrition science: Mendelian randomization. A new study shows that drinking alcohol is not good for cardiovascular disease.

There is salary discrimination against blacks and women in the US, finds James Bessen

I ask Twitter: How is Calico (Google's aging science company) doing? A thread

Being cited on Twitter makes papers (in the cardiothoracic surgery field) 4x more likely to be cited after a year. Will this hold over longer time periods?

I ask Twitter: How long does it take between a discovery and realising its implications? Thread

One reason why low interest rates are bad: They enable zombie companies to exist (They don't make enough to pay down their debt, they just roll it forward)

Why we should say no to more supercolliders

Tanner Greer on the Time to build essay.

In the 21st century, the main question in American social life is not "how do we make that happen?" but "how do we get management to take our side?

Effects of the WWII increase in research funding on the formation of research clusters. The authors have another paper coming soon titled Mission-Oriented Research in a National Emergency: Lessons from the Office of Scientific Research and Development in World War II which sounds interesting.

Manufacture of buildings in assembly line is something not all that common these days, causing amazement when Broad Group puts up skyscrapers in weeks. But in the US, to my surprise, it used to be more common, 60% of all housing was factory-made back in the 70s. Lobbying destroyed that. Here are the slides.

The Oxford Handbook of Innovation Management. Haven't read it, but might!

I ask Twitter: Why is the NIH so big? Related

Jason Crawford on the interplay between science and engineering in the invention of the transistor.

Noah Smith asks twitter: What are the 1 to 5 most important discoveries since 2010?

And da Vinci, the OG "fake till you make it" hustler.

I ask Twitter: What would have happened with GPS absent any knowledge of general relativity? My view is that it wouldn't have mattered much (Through curve-fitting adjustments can be made) and then eventually the search for explanations of the inconsistencies would have lead to GR.

The FDA is approving more drugs than ever before and it has sped up by a factor of 5 since the 80s. Also some discussion on pharma companies abusing the orphan drug legislation. 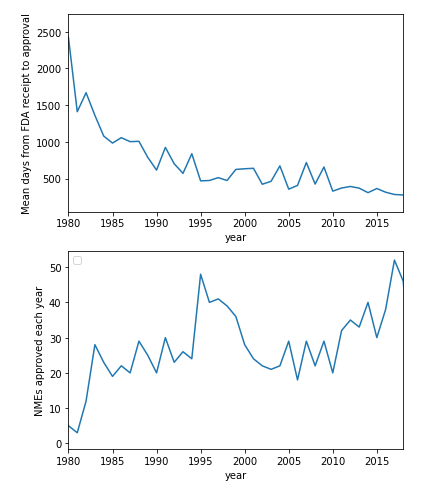 ‹ Epigenetic clocks: A review Science — The Ending and Endless Frontier(s) ›