I write this article in response to this piece written by Claire Lehmann at Quillette magazine.

The article itself is aimed mostly at Jason Brennan's recent work Against Democracy (PUP, 2016), but to some extent it could be read as a critique of similar works like Bryan Caplan's classic The Myth of the Rational Voter (PUP, 2008) , or Ilya Somin's Democracy and Political Ignorance (SUP, 2013).

Lehmann first retells the many criticisms that 'low information voters' have been getting lately, during this highly entertaining year that has given us exciting plot twists such as Brexit or the upcoming Trumpenreich.

But that's not the whole story, she says:

While she doesn't provide evidence for her first two claims, they are plausible. The third claim, backed by a link to the NYT is also plausible. Recent research (Teovanović, Kneẑevic & Stankov, 2015) does support that rationality is only weakly correlated with intelligence (rs<0.25). For a review of the effect of personal characteristic on decisionmaking, see Toet et al. (2015).

Are high information voters also more prone to rationalisation? The work of Dan Kahan and colleagues (for example here) is often cited in support of this. In what I believe is his most recent paper (Kahan, 2016), he has this picture that handily summarises the problem: intelligence does not affect people's opinion of climate change, on average. And what is worse, if we decompose US citizens into liberals and conservatives, intelligence does not lead to convergence, but to divergence! 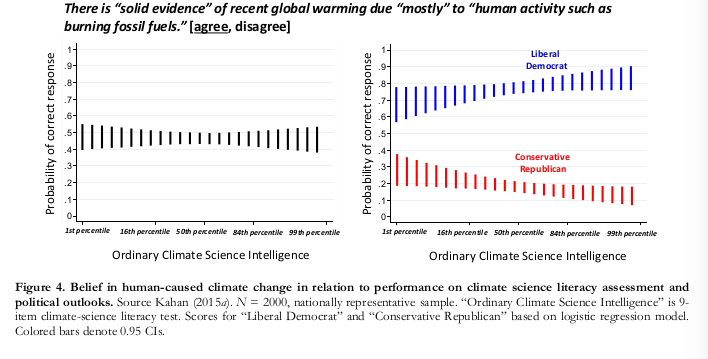 This leads into an accusation of epistocrats: what they are really trying to do is impose their own prejudices and values, they are misanthropes who consider most people_inferior voters_.

In particular, she mocks Brennan's epistocratic proposal by suggesting that a young PhD graduate would have more of a say than an Army veteran returning from service. If this doesn't sound bad (To me it doesn't), she then admonishes us to think of a social sciences PhD whose output would be perfect New Real Peer Review material.

The final part of the essay defends 'low information voters' by saying that research findings such as 'immigration boosts economic growth' are publicised among the 'smart voters', while ignoring the body of research that indicates that immigration also reduces social trust. High information voters, generally in more privileged neighbourhoods, would be simply living in a bubble, unaware of the reality of the 'low information voters'. And then, if there is a valid, research backed reason to oppose immigration, who are those political scientists to tell them what can or can't vote for? Is it irrational to prefer social trust and homogeneity over economic growth?

Further evidence recently used against epistocratic arguments can be found in Jason Weeden and Rob Kurzban's blog here: even if only educated voters had voted in the recent US election, Trump would have won.

To these arguments, I have to make some comments.

First, low information voters are low information voters, and while they may get angry when called so, that doesn't stop them from being so. That is, by objective measures of political or economic knowledge, that's what they are, and that's how they are defined. And even the term low information voter is perhaps too kind. If one is not informed, one may well just vote at random. But the majority of voters are, in addition, biased. Brennan calls the former hobbits, and the latter, hooligans, in his book.

Pace Lehmann, epistocracy is not about imposing a set of values that self-declared epistocrats like, but about reshaping democracy so that knowledge has a greater say in the final decision .  Democracies today already implement some measure of this: typically one cannot vote unless one is over a given age, and typically one's vote does not directly count to decide an issue, but instead it is used to select someone (typically better informed than the voter) who will decide. In addition there are plenty of non-democratic institutions (Judicial branches of government, independent regulatory agencies, and Central Banks). Hence the quip: actually existing democracy work as well as it does (or it doesn't work as badly as one might expect given the electorate's ignorance) in virtue of its nondemocratic elements.

Next, epistocracy is not necessarily the rule of the smart. If what is required for the system to work well is a rationality test, plus a political, economic, and natural scientific knowledge test, so be it. If that works better than democracy, then epistocrats will advocate that. This bypasses the criticisms Lehmann makes. For example, we have preliminary evidence that scientific curiosity does not induce divergence in the responses of Republicans and Democrats (Kahan et al., 2016). Thus that could be used during the elaboration of the epistocratic procedure. If nothing works, then epistocracy shouldn't be implemented.

Would this do anything? In principle, there is no deep metaphysical relation between rationality, intelligence, or knowledge more broadly, and what one would vote. That is, one can be a highly informed racist. In practise, though, those correlations do exist, as documented by Jason Brennan in his book:

Hence, the informed wouldn't be voting for Trump. In the first place, it is implausible that if the electorate were restricted by epistocratic means, one would have the same candidates. And then, voters wouldn't vote for Trump. But didn't Weeden just proved that the informed are Trumpists?

Brennan's response is (or would be) twofold. First, people with lots of knowledge about politics (what the ANES surveys) need not be particularly rational or unbiased. They can just be fanatics. 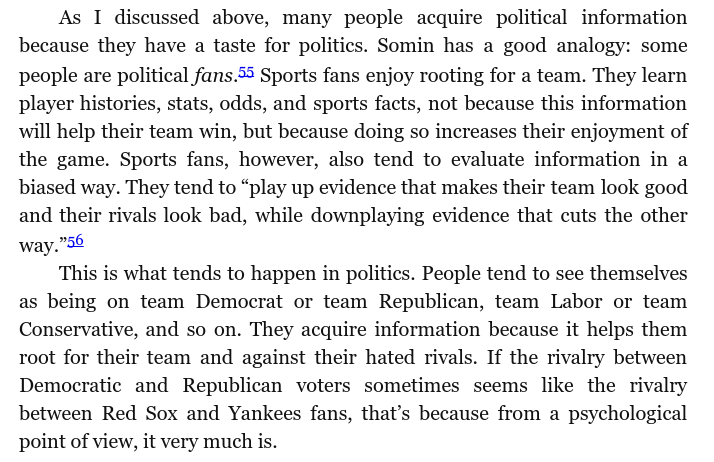 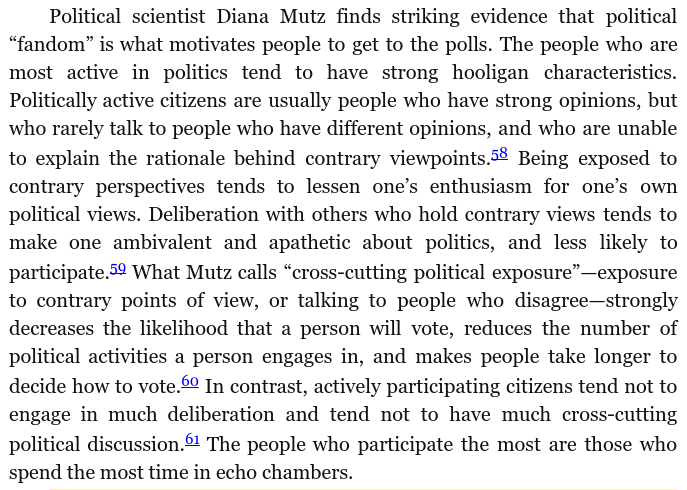 Second: we have to correct for demographic factors. In addition to information, being white, or black, or Jewish, or male, or female, or old, or young, might have an effect on your preferences. Althaus and Caplan control for demographic factors in their studies, which is what Kurzban and Weeden didn't do. (Hence, if we would wish to have a test to vote, we would need to do better than the ANES test. Note that Jason Brennan DOES NOT suggest using the ANES test as a test to decide who should vote. See the Appendix for what sort of questions are in there. 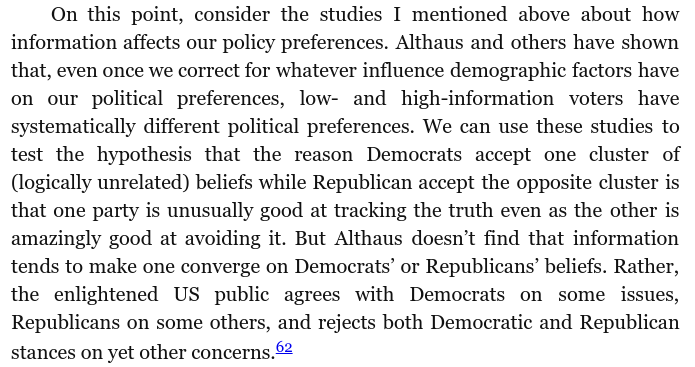 What Brennan does suggest is more sophisticated than that: One of the epistocratic methods that is proposed is that of enlightened preferences. In essence, what would you vote for if you, magically became maximally informed? This is done by asking people about their demographics (or collecting that from Census data), and then having them fill a questionnaire. Then they - everyone! - would vote. Votes would then be corrected by running a linear regression, and extrapolating the outcome that would be the case if everyone were maximally informed, and implementing that.

If we accept that there is such a thing as right and wrong regarding factual questions, and that generally using true facts will lead to better attainment of whatever objective, then it seems reasonable that epistocracy will improve, in theory, upon democracy. So it would be worthwhile to run pilot tests at small scale to see what happens. Perhaps people reject the concept itself so strongly that it is unworkable, and revolts happen. In that case academics should turn to convince people that voting is indeed like a plumbing license, not a badge of moral merit. Once that is done, epistocracy could be attempted.

The 11 ANES questions are:

These are the sort of questions a hooligan would know, so it's no surprise that they don't really separate Brennan's Vulcans from Hooligans.

Compare with the SAEE survey.