Here, I argue that there are good reasons to reject the argument, even if we grant Hanson his view on personal identity.

From his drawing, I don't get exactly what he means. (Are the dots a period of amnesia? Of 'mind jump'?) So I redrew them to present the cases better:

So the Case A is you going to a party, and then forgetting about it.(because you took a pill, or because you got drunk, it doesn't matter that much).

In case C we have en emulated person ("em") that for all effects is the same as a regular person, because we assume we are simulating brains at submolecular level. So we have the em, and then at some point, it makes a copy of itself (a "spur", in Hanson's terms), and the spur does some work, and then ends. I represent this ending by a rhombus at the tip of the arrows. Depending on your interpretation, this means different things. On mine, and most people's, the spur dies. On Hanson, it merely ends. The spur could be thought of as part of the original em, I guess.

Hanson's case B looks like a hybrid of cases A and C. But how does it look on my redrawing?

Well, he says that case B is like A, but that the person moves to a distant location (case B1). So,

So far, so good. This really looks like case A.

Now, for case B2, he says that it can be put like C, but the original em is archived (it goes to sleep) while the spur works.

Since Case B2 doesn't look at all like Case B1, they are not similar. Hence, Cases A and C are dissimilar. Hence, you can say that you don't die in A, and that the spur dies in C.

Now, if we accept this, we can easily perform linear decompositions of people in our minds (case D). Perhaps Hanson did it subconsciously. By doing it, the cases looked to him more similar than they look without that assumption. I see where this comes from, but I don't buy it. Surely you can conceive of yourself as lots of selves, one per second, extending backwards and forwards in time. So you would be dying and appearing constantly. Or each one would be. Or you can think that there is no self, precisely because of this change (as Buddhists do). But the relative constancy in time of the physical substrate in which your experiences happen, your brain, makes it plausible to think of yourself as being a thing separate from the copies you make of yourself. You don't share a consciousness with them, that is. 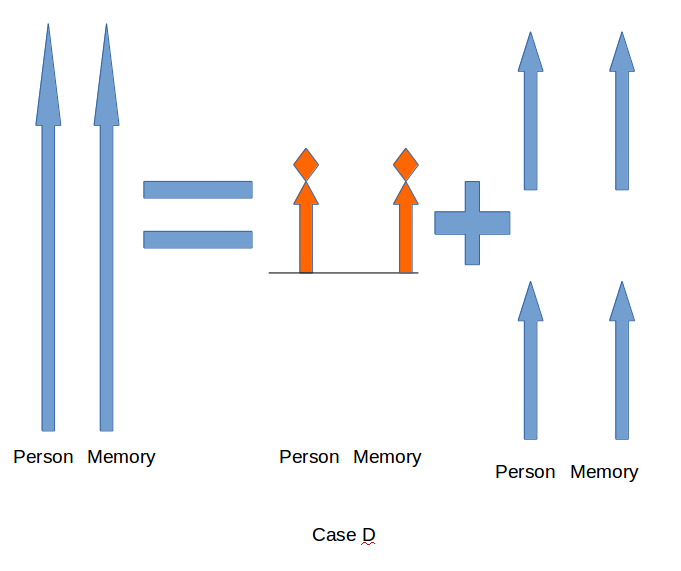 Case D is a linear decomposition of a person in one that goes to sleep while a spur does stuff, and the spur itself. Basically, this is case B2. If you grant the equality, the case is as unproblematic (or even less unproblematic, as there is no memory loss) as Case B1.

Now, regarding the prediction he makes at the end of his paragraph, that seems to me true. I think now most people wouldn't make copies of themselves to make them work, and then end them. And I don't think that the copies would work on whatever task they are assigned just because they happen to be a copy of the original person. But there are people who would do that. In the extreme case, if only Robin Hanson espoused these views, the em world would be tiled with Robin Hansons.

To conclude, I would like to ask Hanson for books or articles that I should read to change my mind.  Last time Hanson was asked for references (by Bryan Caplan, here), he said that Caplan would need a hard science background to understand it (An entire undergrand and grad education worth of material), and that he would need to be young to be more impressionable. Well, I hold a BSc in Mehanical Engineering, I read Penrose's The Emperor's New Mind (which is basically a summary of Physics that Roger Penrosexplains to get to his thesis) when I was a teen, and soon I will have two MScs, (In Industrial and Aerospace engineering). And I am young. I suggested to myself at least Feynman's Lectures. Perhaps Hanson wants to add something in particular to the list.

Bonus paragraph! How to upload your mind to a computer without dying: Do it gradually, connecting your brain to a computer (not slice-scan-copy). That way you would get 'bigger' a la Hanson, and then when you are mostly in the computer, you can discard your physical body.