There's a document around by Block & Keller (2011) ("Where do innovations come from?") doing some very weird definitions.

Given the leading developmental role the US government plays in a vast number of sectors, it is no surprise that at a more micro level, Block and Keller (2011b) found that between 1971 and 2006, 77 out of the most important 88 innovations (rated by R&D Magazine’s annual awards) – or 88 per cent – have been fully dependent on federal research support, especially, but not only, in their early phases – and the R&D Magazine’s award excludes ICT innovations.

Mazzucato says that Block & Keller say that 77 out of 88 inventions were fully dependent on federal research support, just that they received some federal funding.

Note that Mazzucato goes far ("fully dependent") beyond what Block & Keller say. The level of misinterpretation is even higher here, and the findings are used to support not an entrepreneurial state but outright central economic planning.

Block & Keller have a peculiar way of calling something private or public:

Then, they also do this:

This way, they get this chart 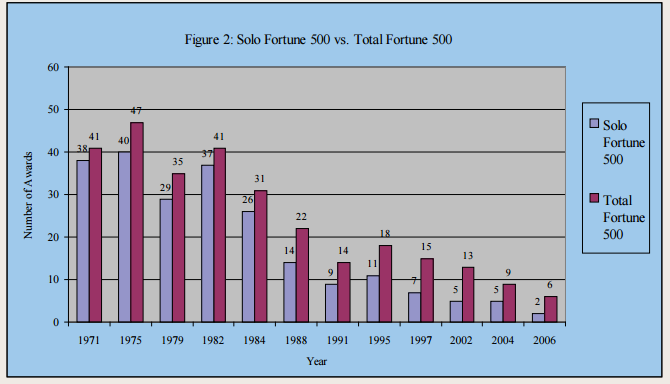 Let's go to the R&D Magazine awards for 2006 and do the count ourselves:

Doing this, for the year 2006, we get that 53 of the awards went to the private sector, 27 to the public sector, and 27 went to mixes between the two. (There are 2 more items than there should be, but +/2 does not change the results).

What is driving the results here is their peculiar attribution policy, plus considering SBIR firms as 'Mixed or Public'.

SBIR firms received money from the government, but the decision of the projects to pursue, and the work done, was done by those companies. I could impute these innovations to Public/Mixed if we had evidence that they would not have taken place without the SBIR funding, which would lead us to an analysis of SBIR itself. (I haven't done a full review yet, but see Wallsten 2000)

Let's repeat the analysis for 2015: there we get 61 innovations for the private sector, 26 for the public sector, and 11 mixed innovations.

The correct conclusion is that, after all, common sense is right, and most of the innovations as measured by the R&D Magazine come from the private sector. This should not come as a susprise: the private sector in the US accounts for 70% of R&D spending, and roughly half of basic science spending.

The interesting questions here would be to see a) How much does SBIR help foster innovation? b) Are these innovations productive, beyond being interesting from an engineering point of view?

The take-home point from Block-Keller is not that the public sector dominates the innovative production in the US, as Mazzucato mistakenly reads, but that collaborations are becoming more important. The case for State-led innovation cannot hinge upon SBIR, as this programme is not _dirigisme, _but attempting to identify what the private sector is already doing, and nourishing it.

Ricón, José Luis, “Where do innovations really come from?”, Nintil (2016-02-03), available at https://nintil.com/where-do-innovations-really-come-from/.