The idea of a nuclear chain reaction arose around 1930-40, the first reacton (Chicago Pile), a very barebones design, in 1942. Later, in 1956, a small (by today's standards) plant at Calder Hall and a more experimental plant at Obninsk some years earlier were the first nuclear fission plants providing power for civilian purposes.

Since then, no new advances in the fundamental physics of reactors have changed. Fundemental physics advanced later, but the discovery of, say, quarks does not impact nuclear reactor design. Advances in reactors have come through higher-level study of the relevant systems, and improved engineering. And on the other hand, progress in reactor design has been hampered by general fear of nuclear energy, and the fact that these are highly capital intensive projects, which reduces the potential gains from learning by doing. Other factors may have been at play, as construction costs have varied wildly between countries: In the USA a sharp decrease was followed by a substantial increase, around the time of the Three Mile Island accident, so that by 1978 the last nuclear reactor was built (With this honorable exception). But in South Korea, costs have followed a steady decline (Lovering, Yip, and Nordhaus, 2016) 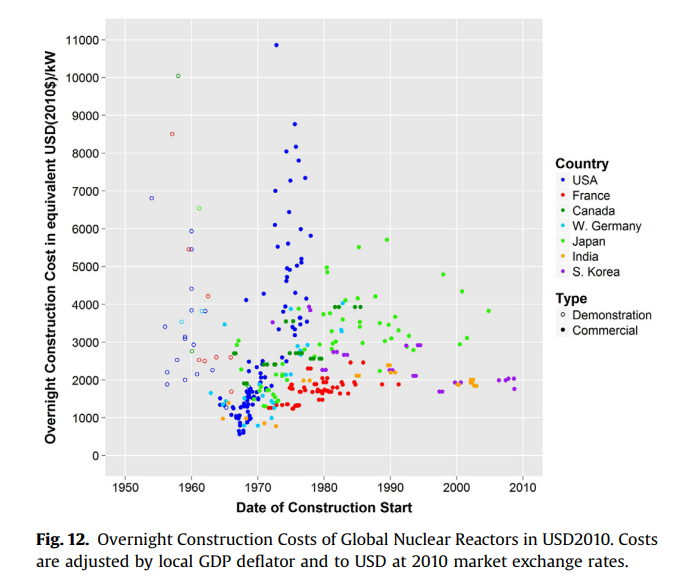 The most surprising feature is the large diversity in trends, with the US and South Korea at the two extremes. Countries building reactors more recently, particularly those with construction starts after 1980, have different trend shapes than the early nuclear pioneers. Rather than an “invariable exhibition of negative learning” and “inevitable” increases in complexity intrinsic to nuclear technology that lead to cost escalation (Grubler, 2010), it is clear that there is not a singular cost trend for nuclear technology, but a plurality of different country-specific experiences. A consistent “rhythm” of cost escalation suggested by Grubler (2010) does not match the historical record

Most likely, these changes do not seem tightly related to concerns for safety. The one reactor type that is comparatively the least safe (the RBMK design) is used only in Russia and no new ones have been built since the fall of the USSR. The designs used through South Korea are not generally believed to be less safe.

If you believed the picture above, you are in good company because it also made sense to me initially: initial prior of doom (secular cost increase) followed by a nuanced view (it doesn't have to be that way everywhere!) sound nice, but the study I just cited has several issues pointed out in Koomey, Hultman and Grubler (2017), including a flawed cost metric, one that doesn't take into accont interest accred during the lengthy construction period,  and data sources too heterogeneous too compare. Is not that it has to be all false, but the author of this second paper tells us to be careful. The Korean reactor data comes from unaudited data from the country's nuclear operator, for example.

The authors of the original paper replied (Lovering et al., 2017), arguing that the Korean data was also cross-checked against data held by two independent Korean public bodies, plus the International Atomic Energy Agency. They also defended their cost metric, arguing that including financial considerations will bias their estimates, as whether a body is public or private or is on a more or less solid financial position will affect the interest rates charged to the loans they take. Their results, they say, may not be useful to compare absolute values across countries, but they are useful to assess trends within countries. Even if the Korean data is biased, if the bias is constant, the observed trend will match the real trend. Lastly, they made their data available.

In sum, measuring costs is more difficult than one might think!

Looking not at money, but at performance, the capacity factor shows improvement even in the US, as existing plants improved procesures and were retrofitted. The capacity factor is the ratio of the actual energy produced by a plant over the total energy the plant could have produced over a year had it been running at 100% capacity. 100% is almost unreachable because the plant has to stop to refuel, or for maintenance. (Koomey and Hultman, 2007) 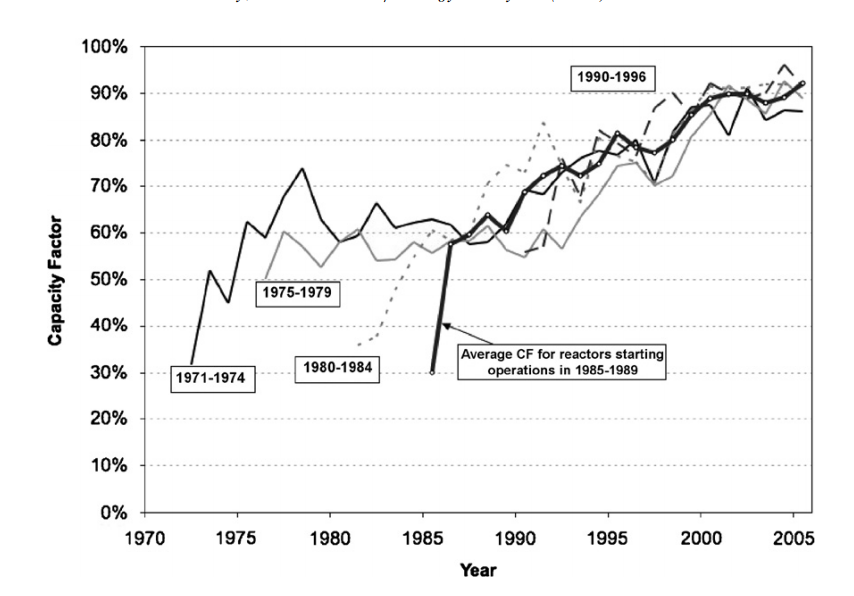 These values also vary by region: 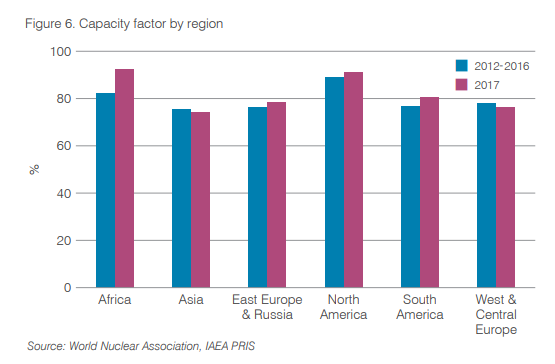 And remember: the US is full of old reactors! It's not like it's that high because they are using the latest designs. (World Nuclear Association, 2018). The report also mentions that capacity factors are relatively constant with increasing reactor age.

As for construction times, considering Pressurised Water Reactor (PWR, one of the most common design types along with Boiling Water Reactors, BWR) historically they have seemed to be constant at around 10 years, but have now decreased to more than half of that. However, this is likely a compostition effect: As the US has built less reactors and other countries build more, global average construction times have gone down. (Moreira et al, 2013). 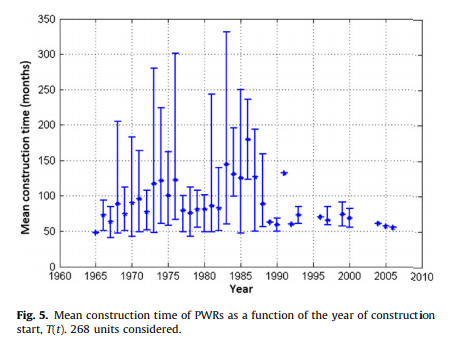 One interesting engineering metric to look at would be energy extracted per gram of uranium over time by country, but I couldn't find that. Instead, for overall end-to-end operational efficiency, we'll have to take the cost of energy produced. But that has its own issues: Cost seems to be basically paying back interest plus fuel costs, and fuel costs -buying uranium- is something that cannot be controled by the plant.

In the US at least electricity costs for nuclear power have gone up and then down, but still over their peak. One might think that the bunch of new reactor designs coming up (Generation III and above) will bring down costs even more. But it's too early to tell. For now we know that Westinghouse's AP1000 reactor, which was supposed to be cheaper and built in pre-fababricated modules ended up in cost overruns so massive that bankrupted them.

Nuclear fission as of today seems like the new vacuum tube, to be superseded by a new technology that replaces it in the same fuction. That may be nuclear fusion, or solar if the current cost decrease trends continue, and if multijunction cells can be made cheaper than they currently are.

In sum, the case of nuclear is a clear case of institutional factors at play in how an innovation plays out over time. There is evena paper that has argued that the whole landscape of nuclear energy looks the way it does because of institutional reasons (military secrecy and subsidies) that locked-in a particular design family (PWR and BWR). Furthermore, organisational changes and tweaks to existing infrastructure have been able to squeeze almost 2x the power out of the same reactors by increasing the capacity factor. Thi

The same might have been true for space (Cost-plus payments and the need for large launchers required by large military satellites) until SpaceX came in. And for nuclear fusion a similar history may have also happened.

#nuclear energy
‹ Is (useful) physics over? Building skyscrapers, and spending on major projects ›