You might have heard people saying "I only trust the political views of people with children, because they actually have a reason to care about the long-term future, unlike non-parents" or that "I don't trust anyone's political opinion if they don't have children. I have a stake in the future that they don't." or similar.

There are two ways one could interpret this claim:

Operationalizing "long term orientation" is hard, but after a brief twitter exchange on this topic, I started with a quick search on the World Value Survey (in the US) where they ask people "Looking after the environment is important to this person, to care for nature and save life resources". 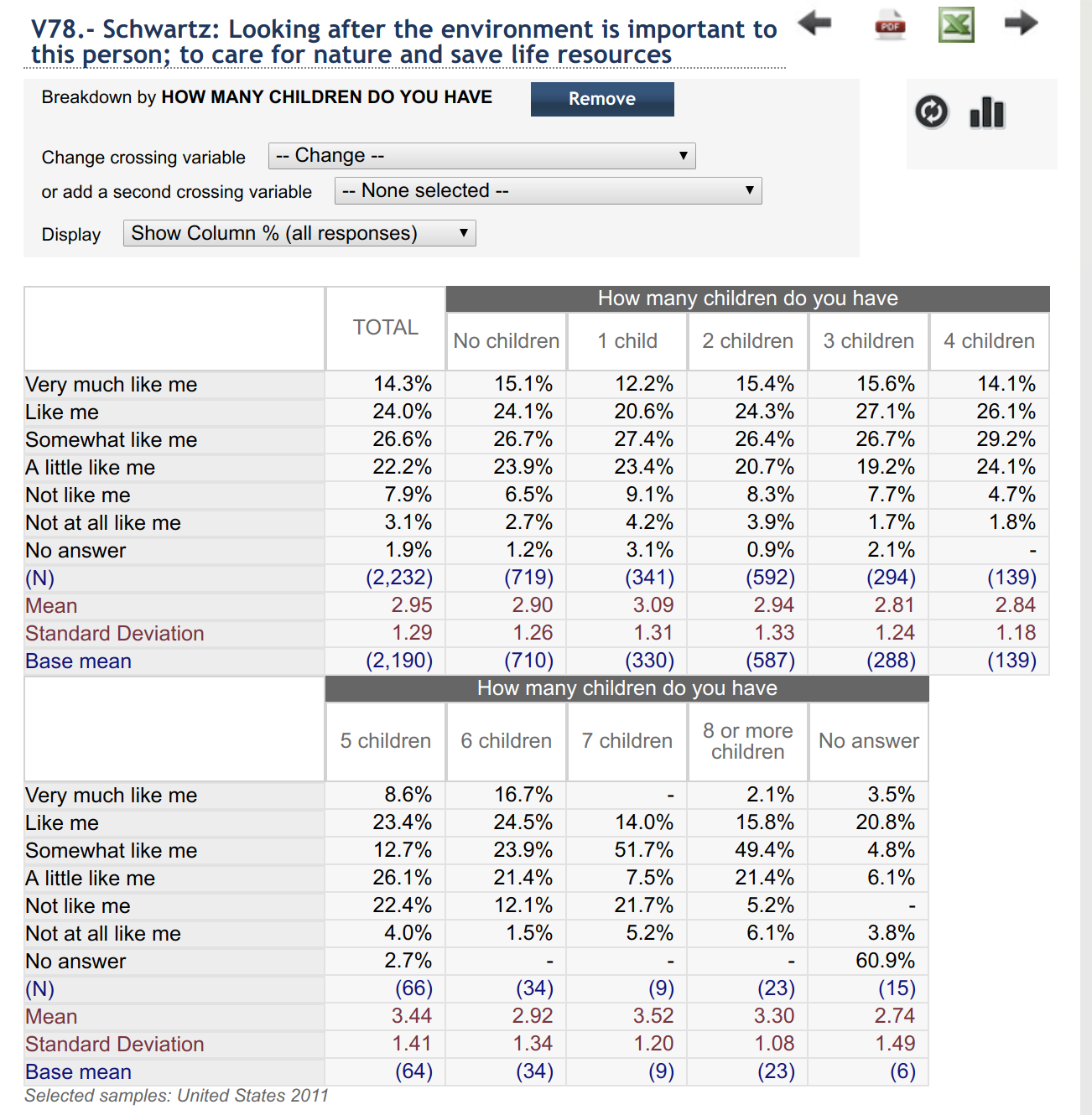 We can compare the effect of the "No children" and "1 child" buckets with a t-test and we do obtain a statistically significant small effect (d=0.15 , p=0.0279). However, comparing the childless with people with 2 children gets us an insignificant result (p=0.581), and likewise for those with three children (p=0.3). So not very revealing.

A paper I found (Thomas et al., 2018) studied the causal impact of having kids on concerns for the environment. The study is a simple one, taking a large survey (n=18176), and pooling a series of questions into an environmental concern scale, and considering also impact on behaviours like "taking fewer flights when possible" or "buy recycled paper products". The paper also looks at how environmentally concerned were people before having kids to see if that has an interaction.

What the paper finds are very small effects, and in the opposite direction: having kids makes people less concerned about the environment. Interestingly, for parents who were already highly concerned, the coefficients were positive for attitudes, but not for behaviours. In sum

Our results show that parenthood is linked to a reduced frequency of some environmental behaviours. These behaviours are consistent with a greater need for caring for a child than for sustainability, such as turning up household heating, increased driving and avoiding public transport or car sharing, and keeping lights turned on (possibly as night lights). The transition to parenthood involves changing priorities and actions, often where behaviours are focused on producing benefits for the child’s immediate well-being, and not future planning for environmental protection. [...] We find that even those with strong views may only develop a marginal increase in their desire to act more sustainably after having a child, and then this intention may not be reflective of actual behaviour change

Interestingly, in the introduction, the paper says that this has been underexplored, justifying to some extent the reliance on initial intuitions, as no better data has been available until recently,

Despite the intuitive appeal of the legacy hypothesis, as we refer to it, the hypothesis has received relatively little attention in the literature. The evidence that exists suggests a complex picture, confounded by other factors, and differential impacts on attitudes and behaviours. Furthermore, almost all of the current evidence is cross-sectional. The best way to test the legacy hypothesis is through longitudinal analysis, which enables the examination of changes in environmental attitudes and behaviours following the transition to parenthood.

This is the latest study on the matter, and there are no meta-analysis available. Judging from the literature review, it does seem like a null effect or a small effect size is what that meta-analysis would find.

Some more, anecdotical evidence is in Julia Galef's tweet above, for pro-nuclear energy promoters, and anti-nuclear weapons activiss.

Also, anecdotically, one could have a look at those people most concerned with the far future, like the scholars of the Future of Humanity Institute and compare them to other academics. It's hard to come by accurate personal data so I won't dig into that.

What else could we look at?

Ideally to have a more robust result we'd like to have more operationalizations of "caring about the future" than climate change and the environment.

Perhaps we could look at the effect of having kids on general pro-social attitudes. A PhD thesis from 2015 I found mentions that the belief that childless people are more selfish is widespread, but not empirically assessed as of its writing. The thesis itself finds that parental status does not predict happiness, selfishness or life satisfaction (controlling for age, income, education, marital status, health, sex, and race). The design here is not causal, just correlational, but still is some evidence.

I tried searching for various keywords in google scholar and google (pro-social, selfish, childless, parent, parenthood, kids, causal, effect, future, longitudinal) but this search didn't return anything useful. Preliminary, it does not seem like having kids make you more future-oriented, so paying more attention to those with kids in matters regarding the long term is unwarranted; instead such attitudes may reflect an stereotype that after examination turns out to be false.

Do let me know if you know more about this topic! I'll edit this article accordingly.

Ricón, José Luis, “On the relation between parenthood and caring about the future”, Nintil (2019-03-08), available at https://nintil.com/on-the-relation-between-parenthood-and-caring-about-the-future/.