I recently finished reading this book and here there are some thoughts about it.

A summary of the book is something along these lines: Law is useful because it provides a stable framework for social interaction. Without Law, no civilisation as we know is possible. But currently the practice of Law has become bloated, expensive, and slow. At least in the US. So this would count as one more instance of what Scott Alexander pointed out in a recent post: cost disease. Hadfield blames it on something that metaphorically could be described as a lawyerly coup d'état.

The solution? Markets in Law. Not as far as Randy Barnett, but a bit beyond what exists in the US. The solutions she proposes are not radical, as they are already in place to some extent in the UK and the EU. The proposals are essentially

She also emphasises that attempts to copypaste the legal systems of the West onto poorer countries won't probably work, as those systems are expensive to run, and not adapted to the local realities.

Some quotes from the introduction: 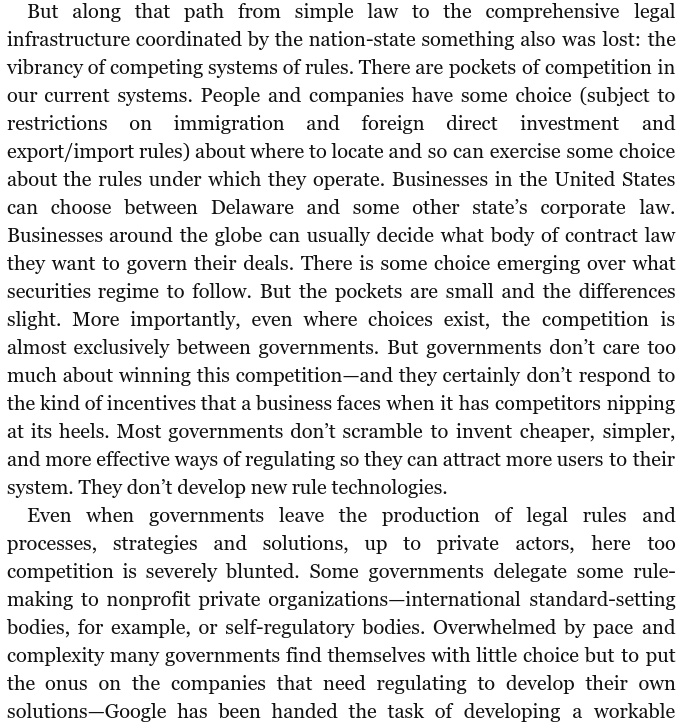 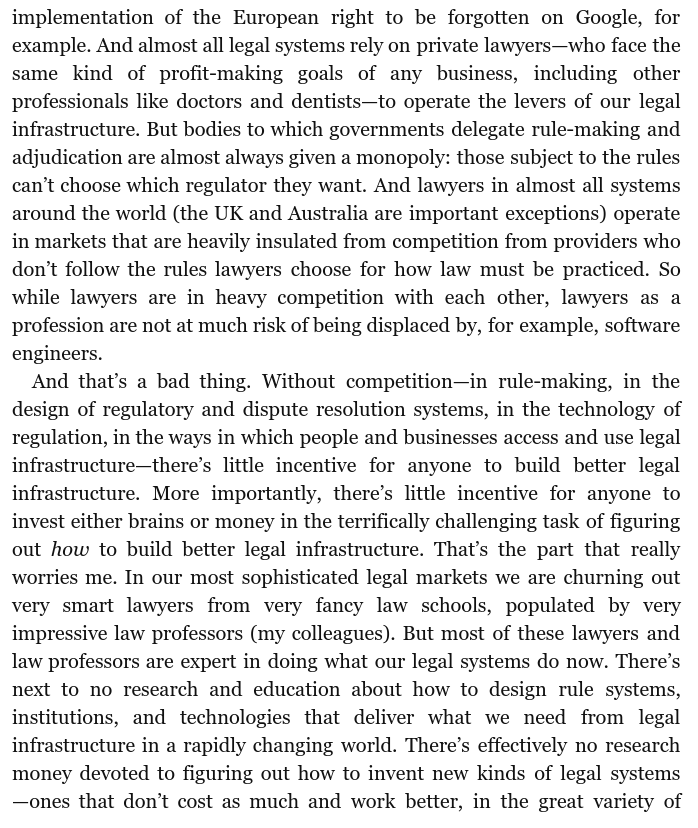 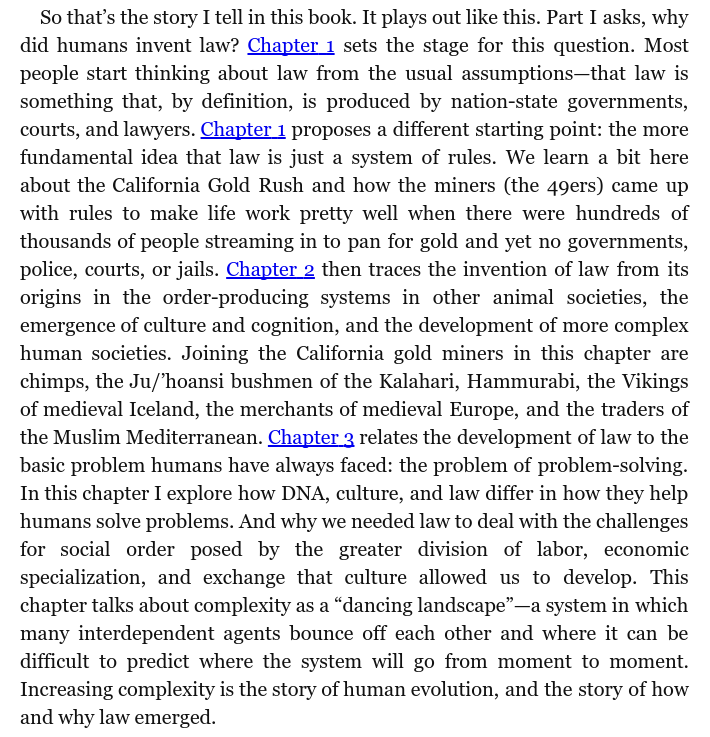 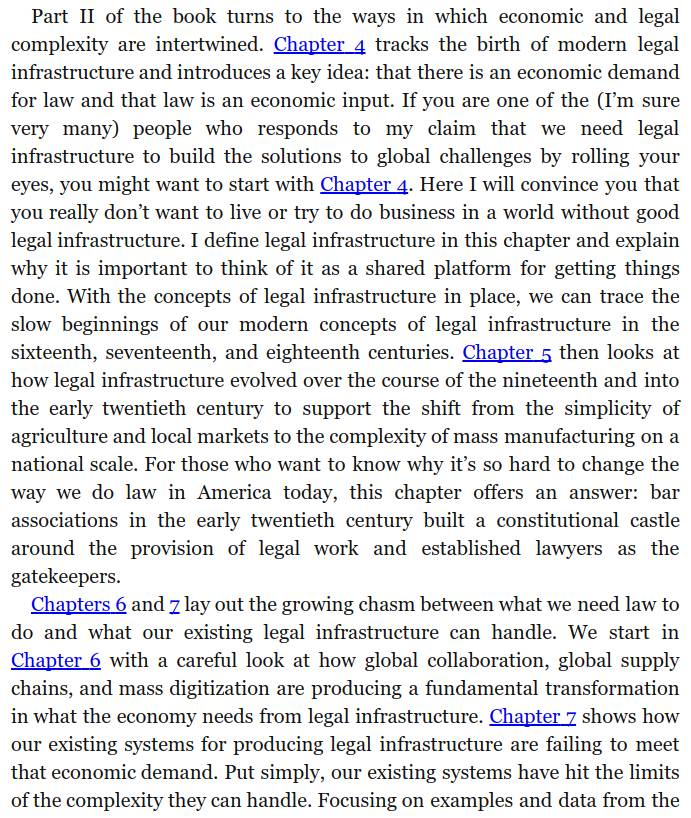 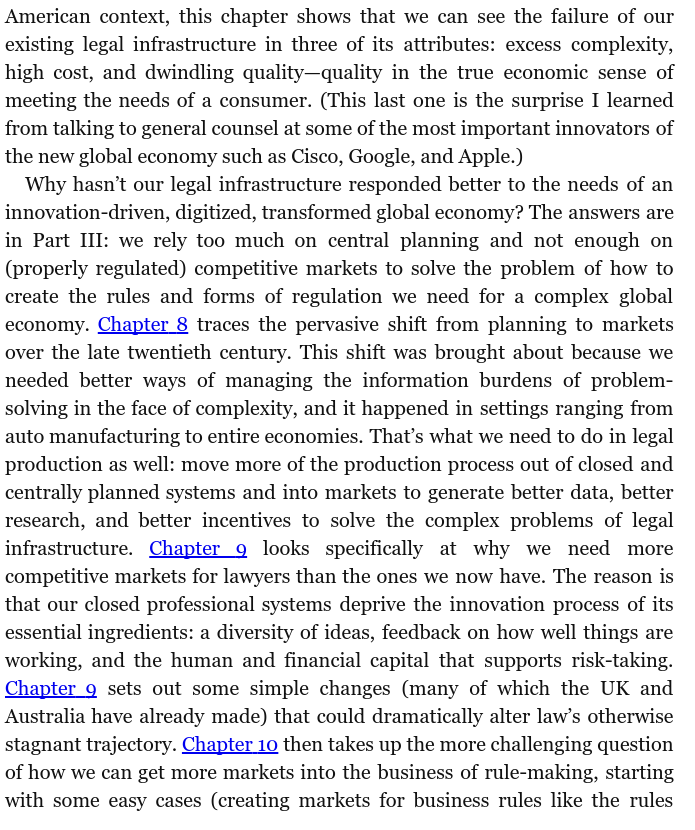 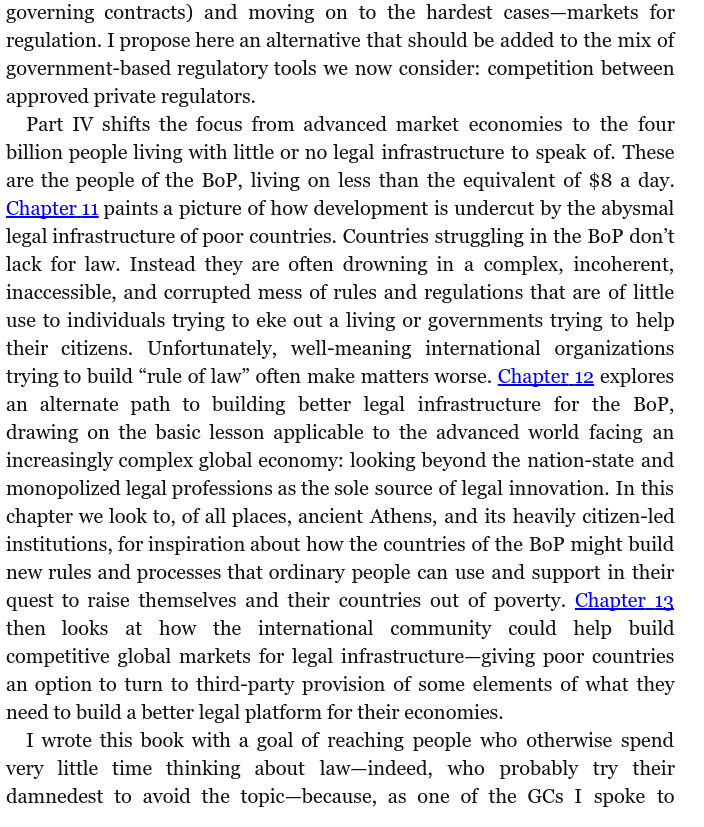 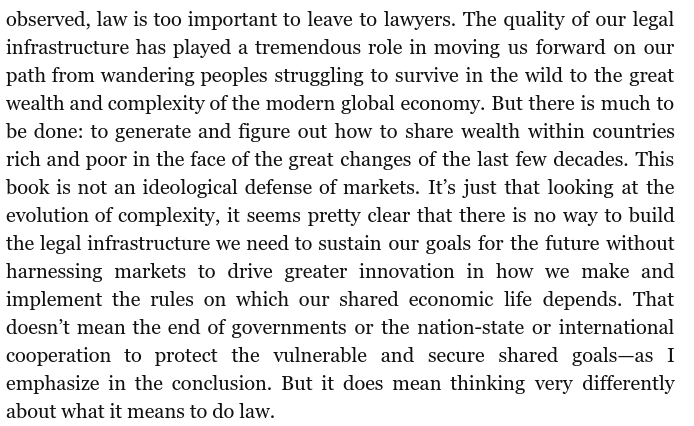 The solutions proposed make all the sense in the world, and as I said they are already in place to some extent. It is the US that has to adapt to get a XXI century legal system.

For example, in Europe, you might have seen the famous CE logo. What it means is that the product complies with the European Comission's Directives.

How do you get the CE logo? The Directives specify various way (It depends on the Directive). Some products accept self-certification: the company checks the product and if they think that it meets the Directive, they include the CE logo and sell it. Other times, an external party is required to get CE. But these entities (notified bodies) need not be and usually aren't government or public entities. They are agencies (Like AENOR in Spain, BSI in the UK) that check whether a product complies with the regulation, for a fee. In turn these agencies are audited by a State level regulator. State level regulators like ENAC in Spain  or UKAS in the UK then regulate the notified bodies. These agencies need not even be public. UKAS is a private non-profit that signed a memorandum of understanding with the British government.

These Directives are also quite different from your average regulation. Instead of telling you how to do things, they tell you what things to do. By this I mean that you could be told that in order to design safe glass, you need to follow this or that manufacturing procedure, use this or that material, etc. This is how regulation typically works. EU Directives instead say 'The glass shall not break during typical use'. The advantage of the second approach is that it doesn't stiffle innovation: As long as you glass doesn't break, you can do whatever you want. It does create extra work for the regulator, which is why typically along with a Directive, an implementation guide is issued such that if followed, approval is guaranteed. If not, the manufacturer needs to collect evidence about the process followed and submit it to the regulator for approval, which takes more time. This is known as the New Approach. For example, if you manufacture lifts, the Directive 2014/33/EU applies to you. Admire the vagueness of the Directive: 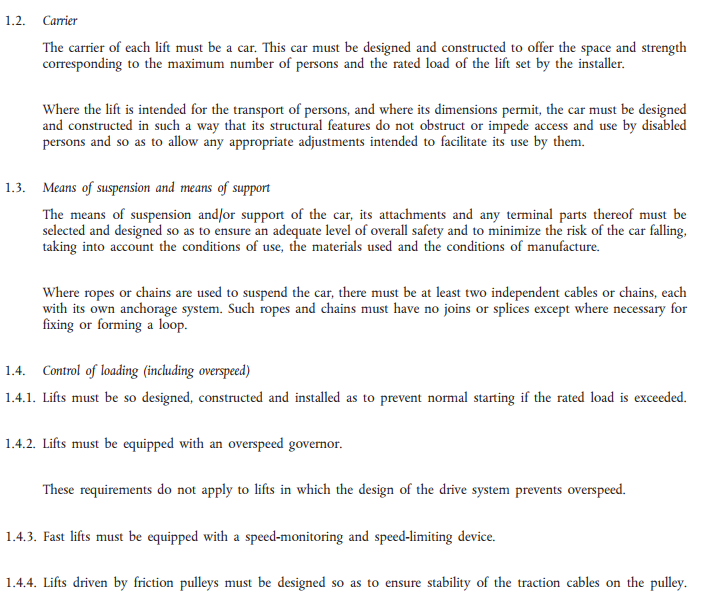 The application guide then specifies how to comply with that 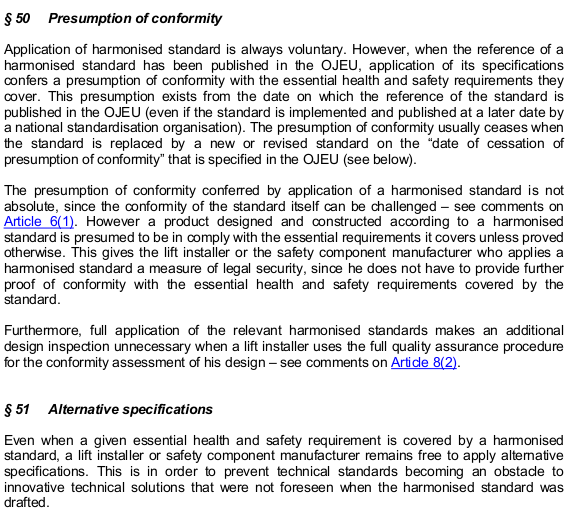 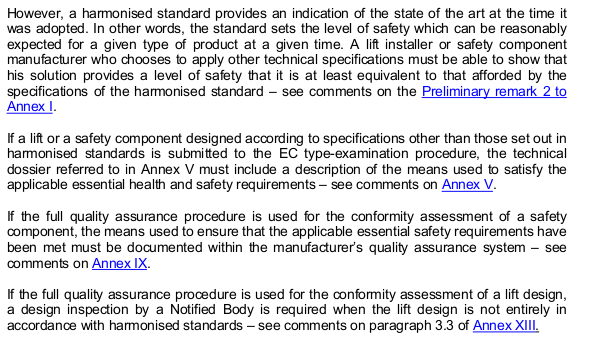 A similar system is in place in the UK for the regulation of the legal profession. To provide legal services one need not go to law school. You only need to be accepted by one of many entities that act as regulators for the profession.

The lawyerly coup that I mention earlier is the reason why the US is not like this. Initially, anyone could provide legal services. 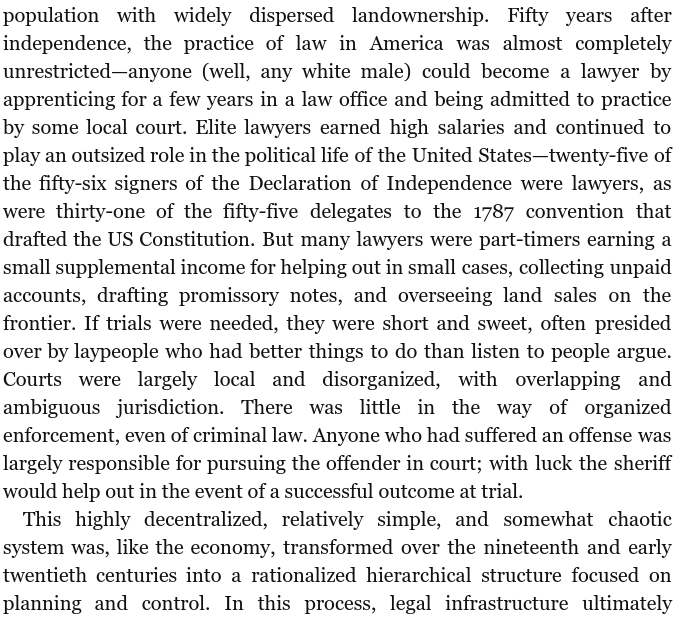 But then this happened. I copy quite a few pages because I think this is one of the most important sections of the book. I knew about the proposals she makes, and why they make sense. What I didn't know and surprised me was the story of how lawyers became so powerful in the US. In a way it follows the story of other regulations that exist today in the US (Like the minimum wage or regulations of medical practise). They are today rationalised in one way (raising wages or ensuring quality), but they didn't come to exist to fix existing problems, but for more self-interested reasons. Which makes invalid the argument that if a regulation is there, it is because it was really necessary. It may well be, but a Whig theory of regulation shouldn't be a default. Anyway: 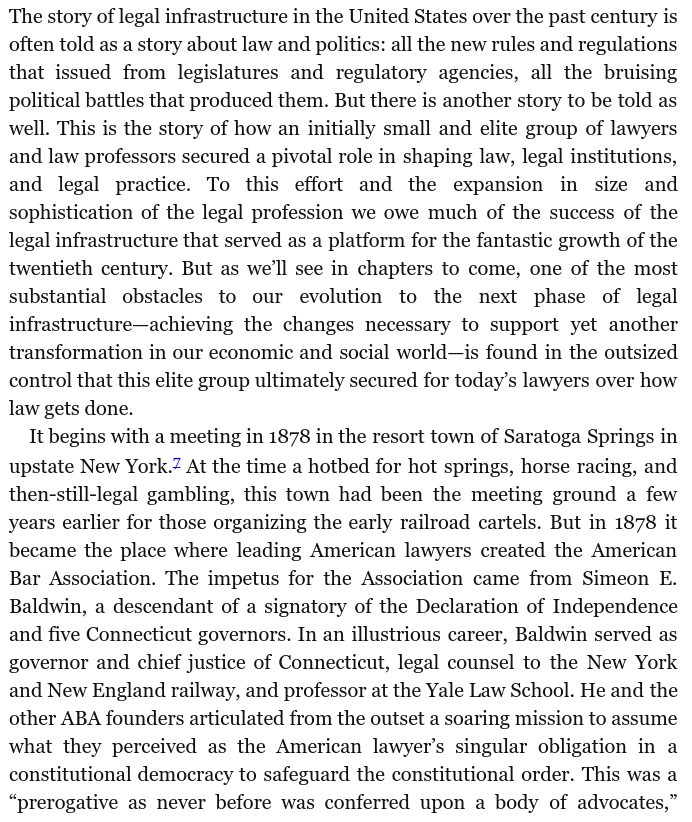 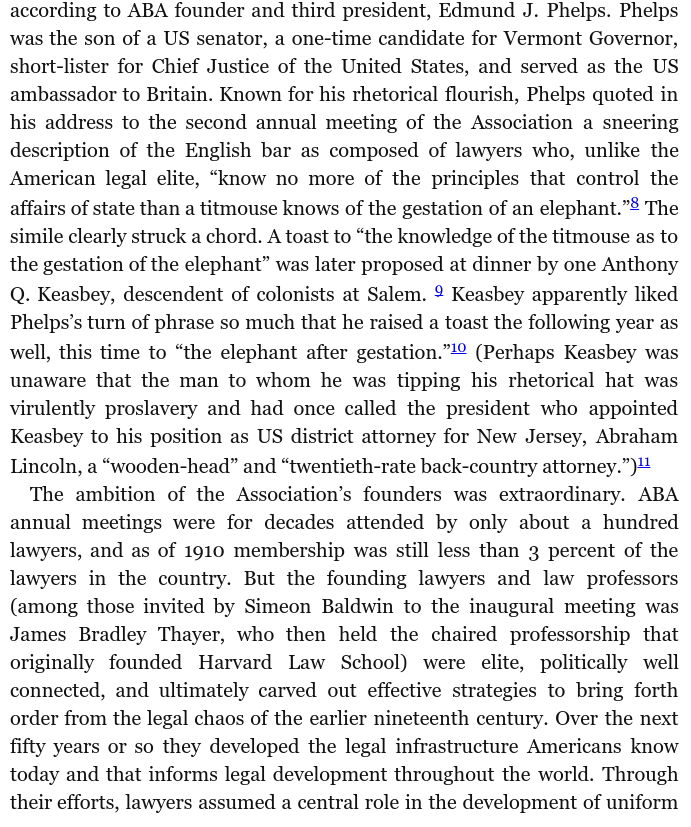 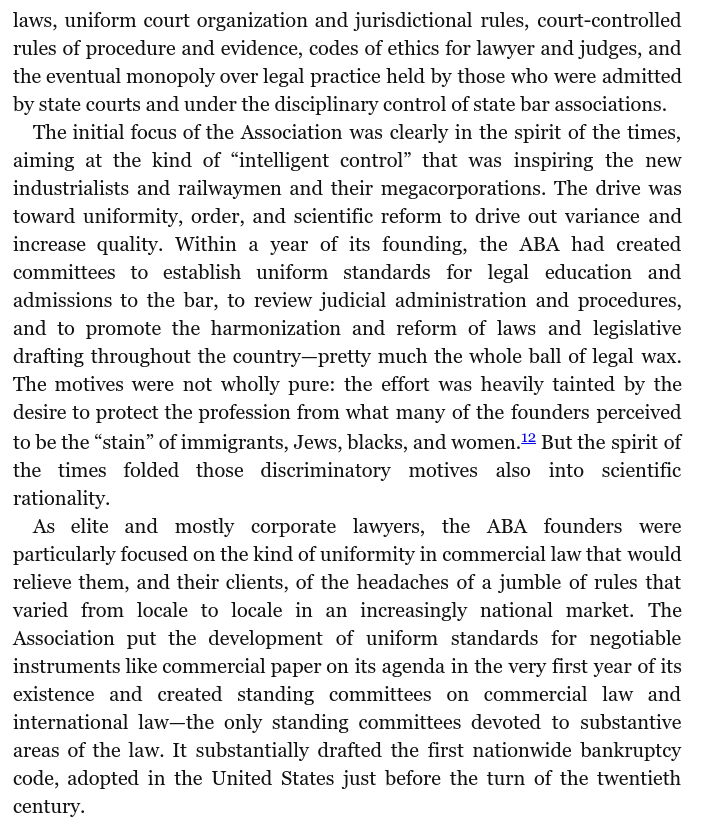 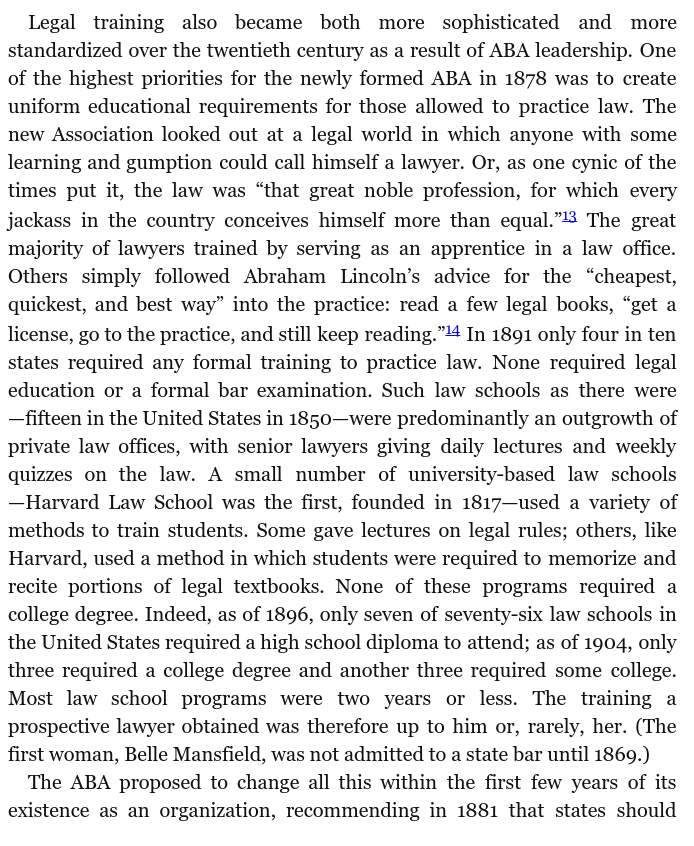 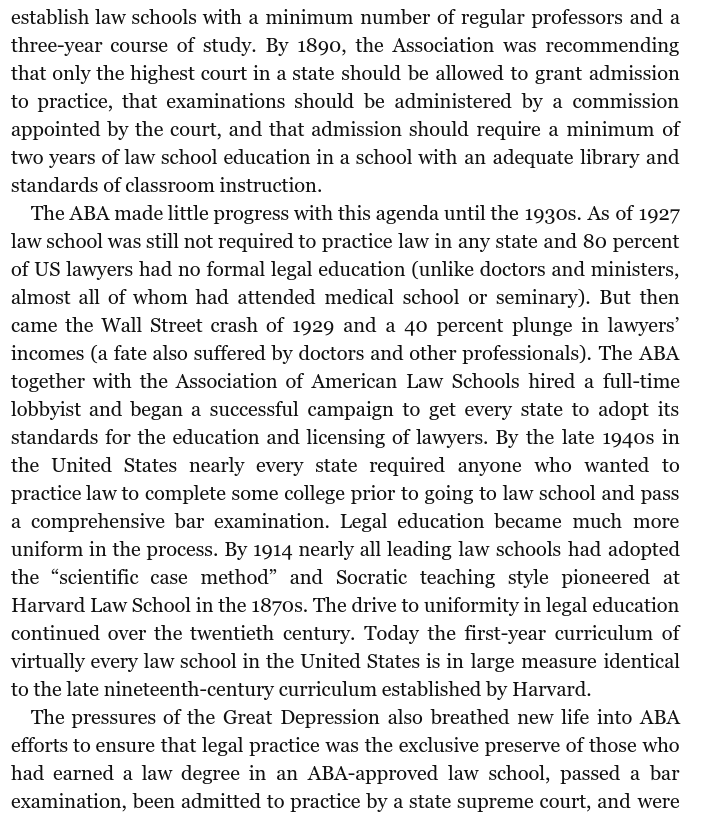 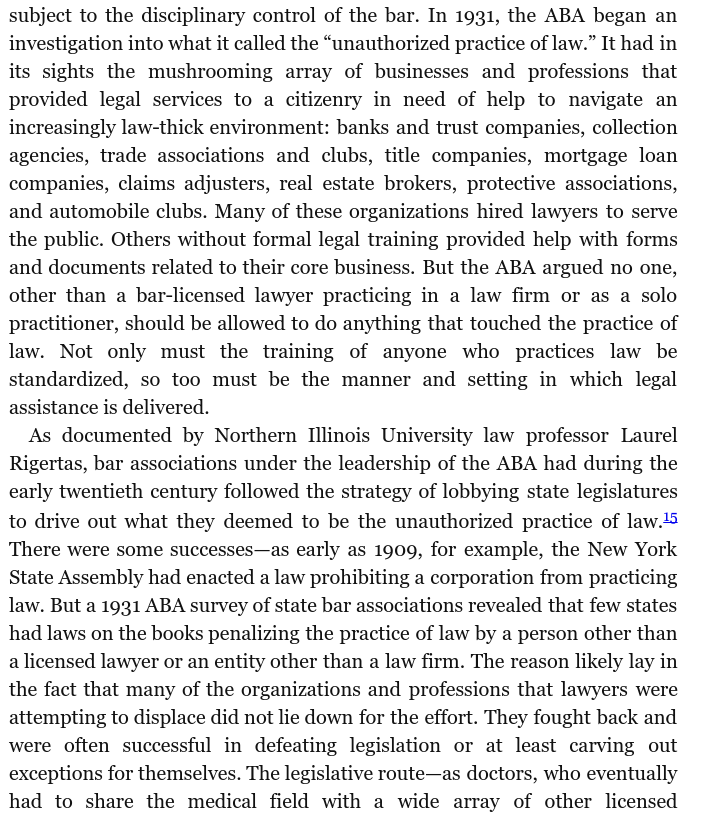 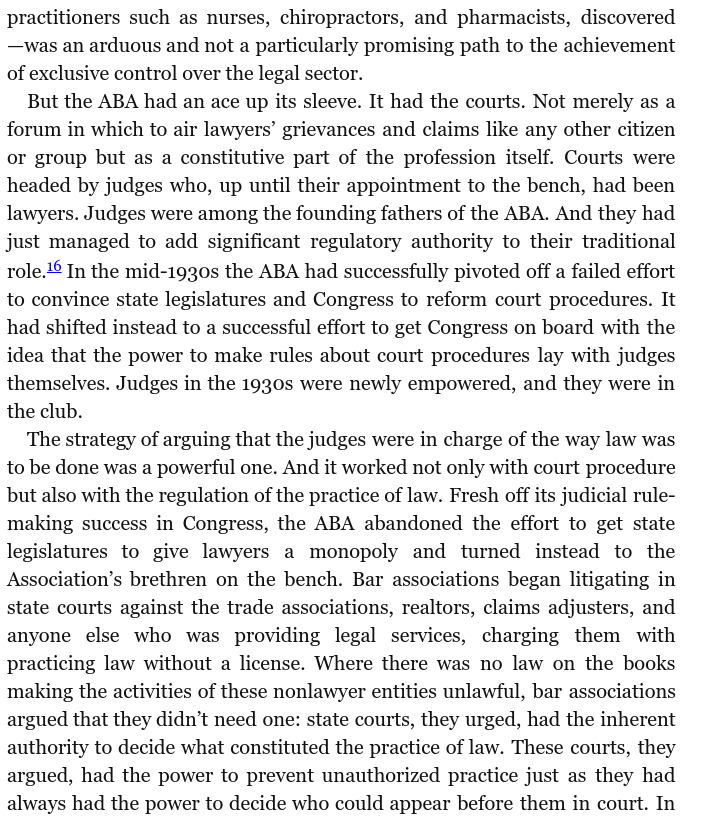 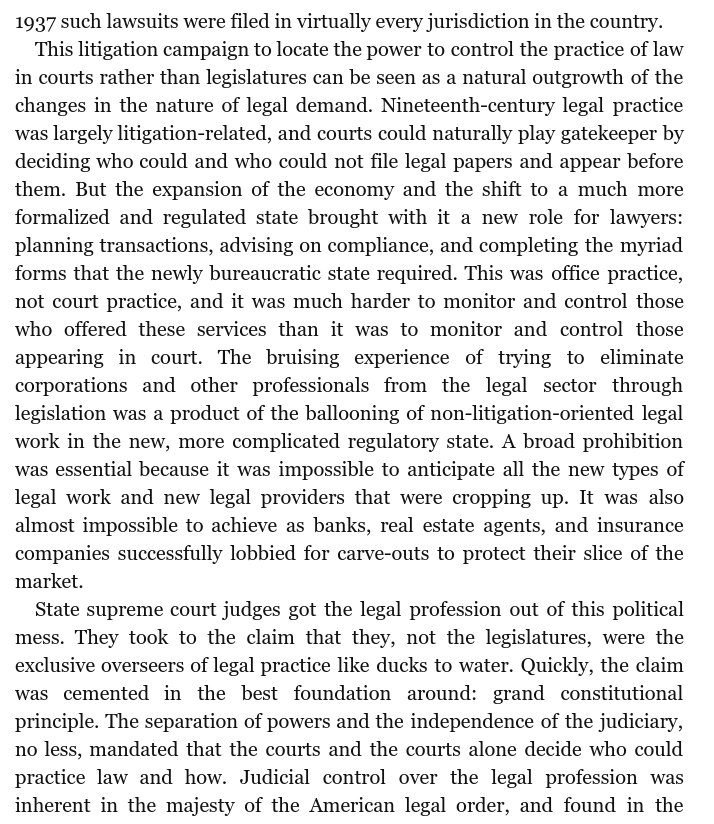 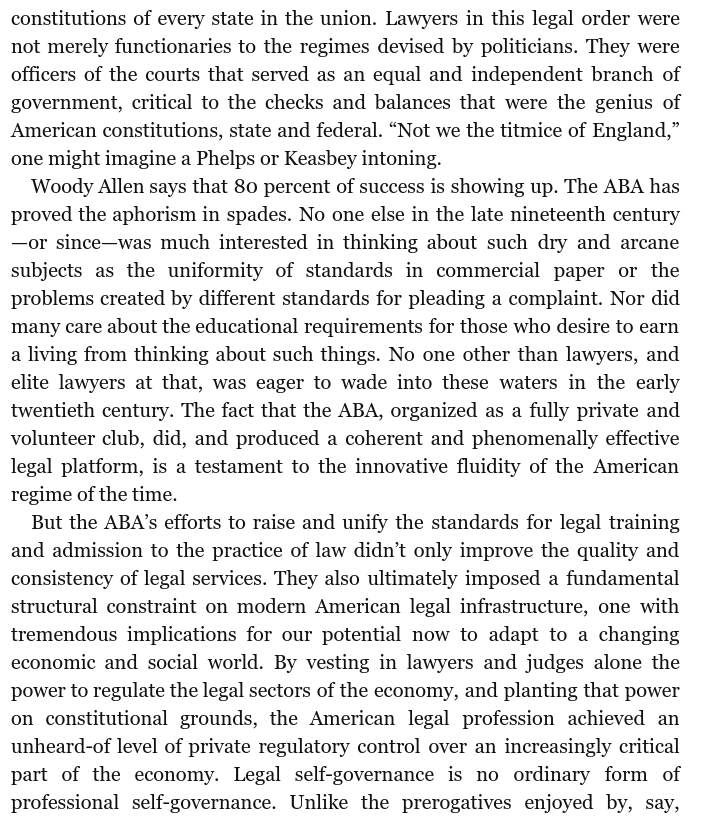 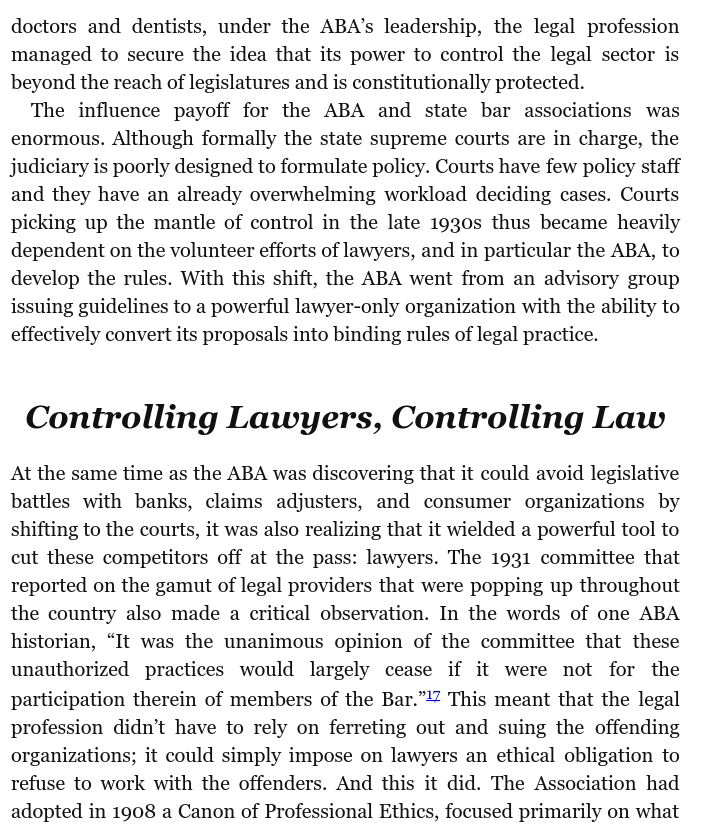 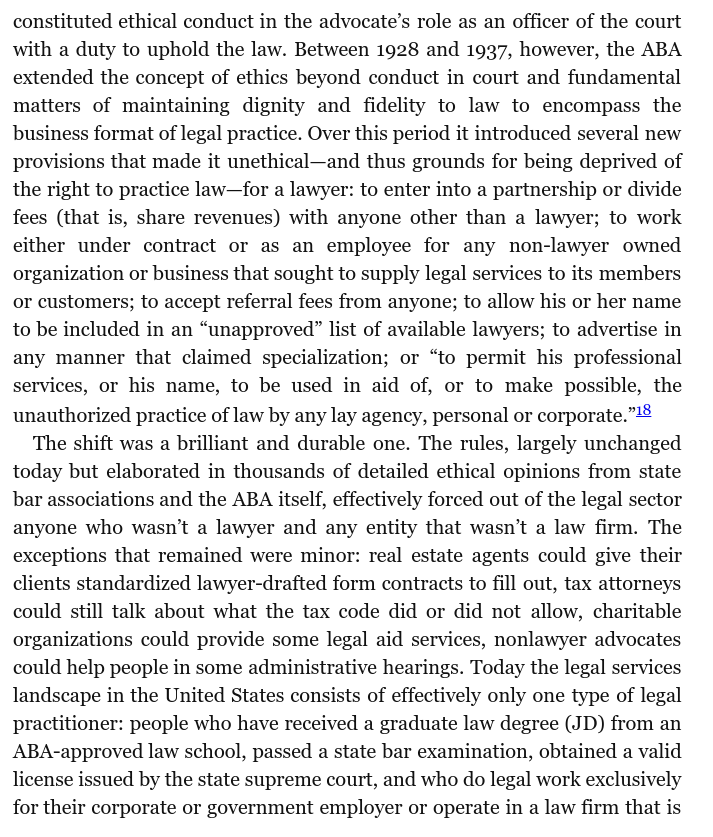 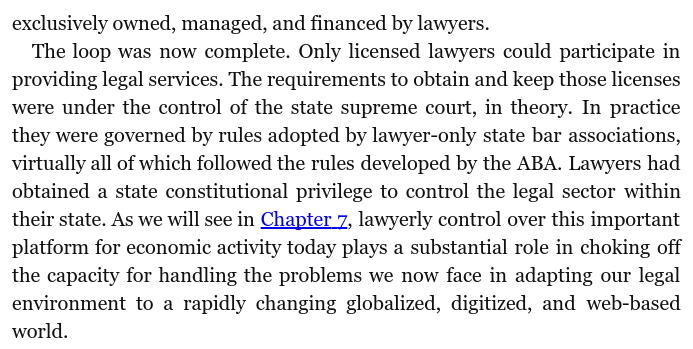 To what extent is this applicable outside of the US? No idea. But I was quite surprised about what Hadfield tells in her book.

‹ Pollyanna über alles: A critique of antinatalism This week's links (2) ›