. Actually, 0.759, the ninth highest in Latin America. We could wonder why this is possible, given the island's sociopolitical regime. Does castrism work?

First, the reason there is a correction in the first paragraph is that the often quoted HDI of 0.815 takes into account a GDP figure that is wrong. So there's one reason why the HDI is lower than it seems, to begin with. You can also read Ribeiro, Stein, and Kang (2013), who argue that Cuban GDP growth was diminished by socialism, and not so much by the American blockade, and furthermore that Cuba would have, counterfactually, grown more had the revolution not happened.

The second reason we will explore is the fact that Cuba had a high HDI to begin with, before the revolution. We would have to,  then take this as a baseline for our comparisons.

So how was Cuba before Fidel? Castrism begins in 1959. Back then Cuba was already quite an advanced economy. In Smith and Llorens (1998) we can find some relevant data about precastrist Cuba. Cuba had a infant mortality rate of 32 per thousand births, the lowest in Latin America, and the thirteenth lowest in the world, surpassing even France, Japan, Spain, Portugal, or Italy. By 1990, though, all of these contries surpassed Cuba in this metric. The article points out that Cuban data for infant mortality is probably biased, given the high abortion rate (0.71 abortions per birth in 1991). If abortion is more common for high risk births, the number of children who would have later died is reduced, improving this statistic measure. Other countries have about half this abortion rate.

Regarding number of doctors and dentists per capita, Cuba was already the third country with the highest rates in Latin America, and better in that sense than United Kingdom or Finland.

Regarding literacy rate, Cuba had the fourth highest in all Latin America. In 1995 they had the second, tied with Argentina.

Regarding nutrition, Cuba was the country with the third highest caloric intake in Latin America (data from 1948, other countries' are for 1954-57, so Cuban data would be even higher in comparison). Right now it is the last out of eleven in the list of countries surveyed.

Regarding transportation, Cuba is the only country in the sample where the number of cars per inhabitant falls, from 24 per thousand to 23 per thousand in 1988. One can repeat this analysis for energy, agriculture, and other sectors, and convince oneself that Cuba was indeed quite an advanced country before Castro. To finish off, a quote from the article,

Not long after the previous version of this paper was published (State 1998), the Washington Times quoted the Cuban Interests Section’s objections to the statistical presentation found in the study (Carter 1998). It did not dispute the statistics themselves, the majority of which are reported by the Cuban government itself to multilateral institutions discussed earlier. Rather, a spokesman asserted that the statistics did not take into account the social achievements of the revolution in relation to the distribution of wealth. For example, he said, “[B]efore the revolution, the rich had more food and the poor had less.” This statement is, of course, indisputable, but it leaves unanswered how a society in which virtually everyone is poor is preferable to one in which some people are poor, others are middle class, and still othersare rich.

Note that the Cuban government itself did acknowledge that these statistics were true. Another article, Ward and Devereux (2012) also analyses post and pre-revolutionary Cuba and conclude that:

All indications are that Republican Cuba once was a prosperous middle-income economy. On the eve of the revolution, we find that Cuban incomes were fifty to sixty percent of European levels. They were among the highest in Latin America and were about thirty percent of the US. […] In stark contrast, the best information available suggests that income has declined under the revolutionary regime and may be significantly below its levels of the 1950’s […] What went wrong? With hindsight, the fact that the central planning has ended badly should come as no surprise. Over the last fifty years, Cuba has replicated the failings of command systems elsewhere albeit in a uniquely Cuban fashion. […]  overall Cuban consumption is forty seven percent of Costa Rica. 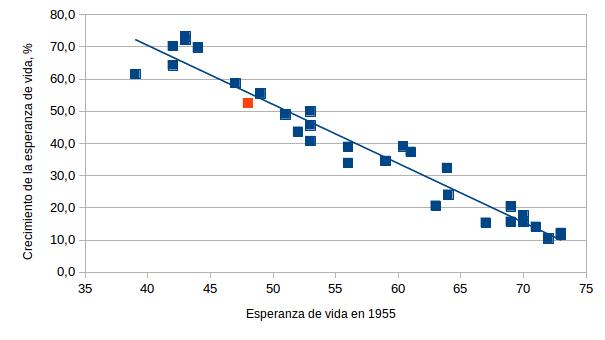 We could also perform the same regression, but only in countries near Cuba (Their life expectancy +/- 5 years in 1955) in the plot, 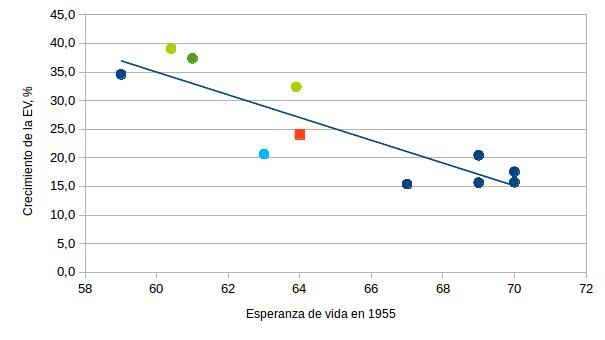 The red square is again Cuba, and the green dots are Hong Kong, Singapore, and Japan (just on top of Cuba). The light blue dot is Argentina.

Seen like this, the Cuban healthcare system as underperformed other countries. Of course, it would be naïve to claim that the only thing at play here is the type of economic system, so we cannot inmediateley jump to the conclusion that Castrism has costed Cuba 5 years in life expectancy. But what we can say is that the Cuban success in terms of life expectancy is explained by its starting position. If something particular to its economic system was really better in improving healthcare, we would expect Cuba to outperform in the charts above. It could be that castrism is indeed good for your health, but that some negative factor has acted as a drag on life expectancy. I - not surprisingly - do support the idea that castrism has either been neutral or bad for life expectancy. This is taking the data at face value, remember.

Next chart is for literacy rate.

Red square is once again Cuba. Green dots are Bolivia and Singapore, the two countries that have outperformed the rest by a meaningful margin.

Focusing on Cuba and its neighbours again, 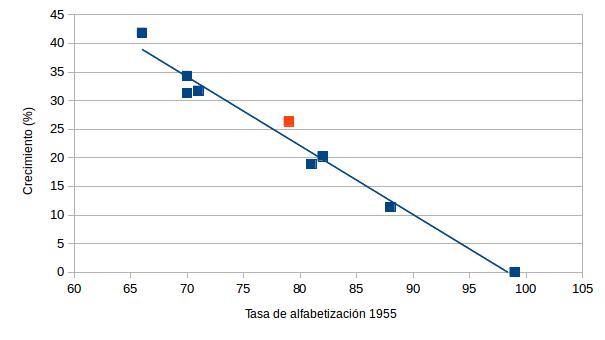 Here Cuba would have progressed more than the average, but not by much. If Cuba had done as an average country, it would have a literacy rate of 97.5% instead of the official 99.8%.

This estimates include foreign remittances, an important source of income for two thirds of the population, but one third does not receive them. If included, Gini would be far higher.

Cuba, though, is still the second most egalitarian country in Latin America, just behind Trinidad y Tobago, according to the World Bank. They don't have values for Cuba itself, or for all of the countries in recent times, so some of these values are from 1995, don't take them too seriously.

In light of the data, Cuba has not improved with respect to similar countries -except literacy rate- and it has worsened in some metrics. Cuba is in general at the same level it was in 1955, or better in absolute terms, but it is plausible to suppose that it would be even better off in the absence of the socialist revolution. Improving over starting conditions is not a particularly difficult thing, what is more interesting is doing as better as possible, given the technological and material constraints that a society faces.

Thus we can conclude that Cuba's high HDI is, first, lower than advertised due to its lower GDP per capita,  and second, that it is mostly explained by its initial conditions. Castro's rule has had no effect on the secular increase of literacy of life expectancy, but it did have a negative effect on GDP growth.

As further reading, this post from the always interesting to read Pseudoerasmus.

These two pieces from Vincent Geloso, regarding the tradeoff between a State being able to reduce infectious diseases through coercion, and a State being able to foster economic growth through providing 'free' institutions, and the credibility of Cuban stats about infant mortality, something I alluded to in this very post.

‹ The paradox of Cuban GDP In defense of Brennanian epistocracy ›