I recently read Mariana Mazzucato's The Entrepreneurial State, where it is proposed that the State has and ought to have an important role in the scientific-technologic field, beyond solving market failures and externalities.

As a reminder that States do things in this sector it is okay. Maybe it could be of some use to believers in some sort of heroic entrepreneurs. But in general, the book is poorly argued and documented. (In the near future I hope to be able to be more specific about this). One this is to defend the modest thesis that the State is present in the causal chain that has brought us many modern innovations. A different one is that the State was crucial or necessary in general. Mazzucato backs up pretty well her the first thesis, but not at all the second one.

Mazzucato has a tendency to incur into what I call Mazzucatisms. A Mazzucatism has the following characteristics:

Reviewing her bibliography, I find the following affirmation

In fact in many cases the most expensive (e.g. capital-intensive) investments in new opportunities such as medicine and renewable energy (investments with high market and technological risk) are being made by the public sector (GWEC 2012).  [Mazzucato] Fried, L., S. Shukla and S. Sawyer, eds. 2012. Global Wind Report: Annual Market Update 2011. Global Wind Energy Council (March).

Where it is said

** key factor adding to the growth of the wind energy sector has been the support from public sector investment over the past three years. Several governments provided considerable support for the renewable energy sector as part of their stimulus packages** Global clean energy investment reached a new record of $260 billion (See figure above) in 2011. This characterizes a key milestone for a sector that enjoyed an average compound annual growth rate of 37% between 2004 and 2008, but then saw growth slowdown in the face of the widespread recession in 2009. The majority of investment in 2011 was the asset financing of utility-scale projects such as wind farms, solar projects and biofuel plants Major beneficiaries from this increased lending by development banks are the mature clean energy technologies like wind, solar and biomass. Wind has been the single largest beneficiary of these investments to date, receiving $7.2 billion in 2010 alone (BNEF, 2011). In 2011, wind projects made up more than 28% of the $260 billion investment in clean energy projects. A significant portion of this investment was from public sector institutions.

We talk about a "key factor" and a "significant portion". The way the facts are presented in the book, and the way the presents them ir her speeches (chart from slide 28) induces the reader to tink that the largest part of renewale energy investment is due to the State, via Development Banks.

In Who will lead the green revolution? she says

The most visible patient capital made available to renewable technology manufacturers and developers has been delivered through national and multilateral development banks. […] Indeed, the Climate Policy Initiative reports that in 2012 institutional investors, including insurance companies, pension funds, foundations and endowments, contributed only US$0.4bn to climate change mitigation and adaptation projects (a minimal figure considering the US$70trn in assets that they manage). Meanwhile, venture capital, private equity and infrastructure funds invested only US$1.bn.

However, a look to Figures 2 and 3 and Table 1 of the report she cites certainly confirms that these agents have invested those amounts, and that development banks have invested quite a lot. But it ignores most sources of private financing sources without an evident reason. What sense does it make to talk about private investment discounting companies, homes, and commercial financing institutions?

Let's go to the source of GWEC for those claims of the book and her keynote, the Bloomberg New Energy Finance report (BNEF 2013) and here, Figure 3, we can sum up for the private sector 4.1 from Public Market, 1.4 from Private Equity, 2.3 from Venture Capital and 80 from Small Distributed Capacity, plus (148.5-80) from Asset Finance, plus 4.8 from R&D (Numbers are billions). One could argue that the Small Distributed Generation datapoint includes some public funding. If you go as far as considering half of it Public, my argument still stands.

On the side of States, we have 4.8 from R&D and 80 from development banks. These 80 billions were included in Asset Finance, and that's why I substract them in the previous paragraph.

Which is certainly a significative amount, but far removed from the data she shows in her presentation. We are saying States supply 34% of renewable energy investment.

The other report Mazzucato cites (Climate Policy Initiative Report), total investment was 359$bn in 2013, of which 244 were private, which laves a 32% for States.

What I ignore is why Mazzucato does this. Maybe there is a technical reason for not counting the private sources of financing I am counting, or maybe she has yet another report to back her, or maybe there is some section in the reports I read that I've overlooked. Michael Liebreich, one of the authors of BNEF, also questionedMazzucato's charts at some point: 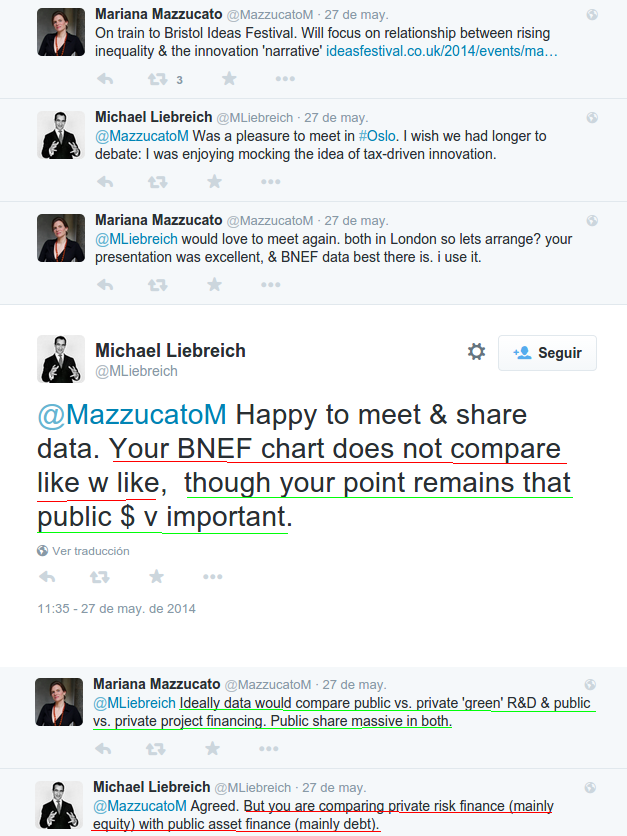 So I conclude that the economist either has some reading and argumentation problems, or that she openly wants to confuse the reader to advance a public agenda. Remember what the book says near its beginning

This work is based on a revised and significant expansion of a report I wrote for DEMOS, a UK-based think tank, on The Entrepreneurial State. Unlike a more traditional academic piece of writing – that can take years from start to finish – I wrote the DEMOS work in a style similar to the political pamphlets of the 1800s: quickly, and out of a sense ofurgency. I wanted to convince the UK government to change strategy: to not cut State programmes in the name of making the economy ‘more competitive’ and more ‘entrepreneurial’, but to reimagine what the State canand must do to ensure a sustainable post-crisis recovery. 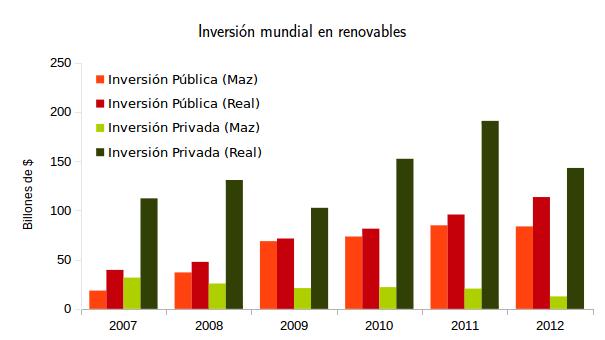 ‹ The Entrepreneurial State: The case of the iPhone (II) Innovation, causality and government ›